The Anti-Terrorism Act in the Philippines: A HUMAN RIGHTS CRITIQUE

“While we recognize that the threat of terrorism requires specific measures, we call on all governments to refrain from any excessive steps which would violate fundamental freedoms and undermine legitimate dissent. In pursuing the objective of eradicating terrorism, it is essential that States strictly adhere to their international obligations to uphold human rights and fundamental freedoms.” 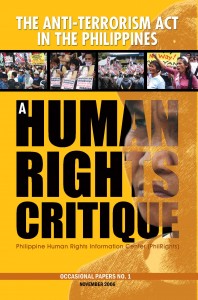 TO SAY that the issue of terrorism and the efforts to combat it are highly controversial is an understatement.

The efforts of various nations, including the Philippines, to pass antiterrorism laws have been met with a lot of debates, criticisms and objections from various sectors. The bases of these objections range from the absence of a universally accepted definition of what constitutes terrorism, to questions on the real intention of the proposed legislation and its effects on the fundamental rights and freedoms of the people.

In the Philippines, one of the major criticisms to the proposed anti-terrorism bill is that it is being strongly pushed as a response to the call of the United States to its allied nations – the “Coalition of the Willing” – to enact anti-terror measures in the wake of the 9/11 attacks in 2001. And in an effort to be in good stead with the remaining superpower, willingly espousing the simplistic “among us or against us” rhetoric of the US, the present administration is fast tracking this law.

This paper culls the various debates and issues arising from the pending anti-terrorism bill in the Philippines and attempts to analyze the human rights implications of such a legislative measure.

Particular focus is given to the US foreign policy on terrorism as a significant driving force behind many anti-terrorism efforts of various states that are generally aligned with the US-led “Global War on Terror” (GWOT).

The paper posits that the framework in viewing terrorism and the ensuing actions designed to combat it should not only focus on protection of the state and its existing structures. What should be of foremost consideration in this entire exercise is on protecting human lives and providing the citizens security in their daily lives, without compromising and reducing the enjoyment of their rights. Human security could be ensured without giving unlimited power to the state, which can result in tyranny and grave violations of human rights.