DEADLY PLAYGROUNDS
The Phenomenon of Child Soldiers in the Philippines

Excerpts from the Foreword

The phenomenon of child soldiers is a reality in Philippine society. The nationwide study conducted by the Philippine Human Rights Information Center (PhilRights) is proof of this disturbing reality, which is indicative of the violations of children’s rights. 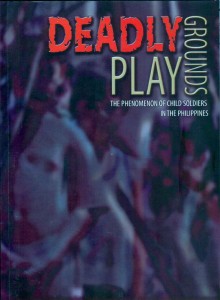 The child soldiers research project, a three-year collective undertaking of PhilRights which began in the second quarter of 2002, is a major achievement and contribution of the institution to the struggle to address children’s involvement in armed conflict in the country.

Like other human beings, children have human rights which all duty bearers must respect, protect and fulfill. While the state serves as the primary duty bearer, all adult members of society – individuals as well as groups – also have the obligation to protect the rights of children and to work for what is in their best interest. Thus, the book is addressed not only to all Philippine government officials, legislators and bureaucrats, but to every Filipino citizen concerned and willing to take action to create a better environment for the hope of the nation.

The book is divided into two major, closely interrelated parts. The first part, tackled in Chapter 1, provides the history and context of child soldiers at the global and national levels. It traces the history of children’s involvement in armed conflict since the start of ancient civilization and the emergence of class societies dating as far back as the period of the Crusades – with religion figuring prominently during this period. The use of child soldiers persisted even after the two world wars and with the intensification of national liberation struggles in Third World countries during the sixties and seventies.

Chapter 1 also discusses the phenomenon of children’s involvement in armed conflict in the Philippines, starting with the colonial era when entire communities were mobilized in fighting against the abuses and atrocities committed by the colonizers. It highlights the participation of peoples and communities in the history of the anti-colonial struggles which was critical in defeating an enemy that was more powerful in military hardware and skills. Numerous tasks and functions needed to be performed by the populace, including children, in the name of survival and national sovereignty.

Chapters 2–6 – which constitute the second major part of the book – present the highlights of the research. Chapter 2 provides the background of the study, including the study objectives, framework and limitations. Chapter 3 elaborates on the study methodology. The major findings of the survey, in-depth and key informant interviews as well as the case study on a specific government program for demobilized child soldiers are presented in Chapter 4. Chapter 5 deals with the discussion and analysis of the study findings.

The research results present the sociodemographic profile, reasons, circumstances and effects of involvement, dreams and aspirations, of the 194 chld soldiers interviewed. Although we do not claim the results and conclusions generated in the study to be representative of the whole child soldiers’ population in the country, these, however, present a glimpse of the world of child soldiers in the Philippines.

While the research findings depict the strengths and resilience of the Filipino child soldier in the midst of harsh and dangerous environments, the findings also expose the constant risks, hardships and deprivations these child soldiers are forced to face.

Chapter 6 presents the recommendations of PhilRights based on the research findings.