INVISIBLE REALITIES, FORGOTTEN VOICES
The Women on Death Row from a Gender and Rights-Based Perspective

On Mother’s Day in 2005, the women on the death row of the Correctional Institution for Women (CIW) sent a Letter of Women on Death Row to Mrs. Gloria Macapagal-Arroyo (Annex 1).  In the letter signed by 26 women, they outlined their situation:

Maraming pagkakataon, panahon na po ang nawala sa buhay namin bilang ina sa aming mga anak. Na halos iniiyak namin ay ang pangyayaring lumalaki ang aming mga anak na walang tamang paggabay mula sa amin. Na ang tanging pinagdarasal namin ay ang mabigyan kami ng isa pang pagkakataon, pagkakataon na maiayos ang aming mga buhay kapiling ng aming mga anak at pamilya….Umaasa din po kaming mabigyan ng kalayaan na karamihan ay biktima lamang ng maling pagkakataon at hustisya. (We’ve lost so much opportunity and time as mothers to our children.  We are saddened by the fact that our children are growing up without our guidance.  Our only prayer is that we be given another chance to straighten out our lives with our children and families…We are also hoping that we be given back our freedom since we are merely victims of wrong circumstances and injustice.)

Though briefly, the letter had, identified a key position – that the women are part of a larger society even as they are in the death row: that outside of the label of being “criminals”, the women think of themselves primarily as mothers (ina) whose role is that of giving gabay (guidance) to their children; that their being inside prison has been a matter of being in the wrong place at the wrong time; and, finally, that justice has been denied them.

The simplicity of their plea enables one to grasp the essence of how the women on death row perceive themselves: as women who are awaiting their final fate as convicted criminals on the death row because, as they argued, they were victims of circumstances and injustice. 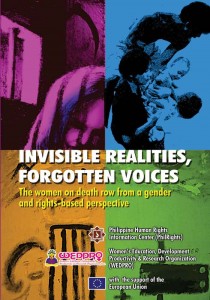 The study is a largely pioneering effort of the Philippine Human Rights Information Center (PhilRights) in collaboration with Women’s Education, Development Productivity & Research Organization (WEDPRO).  As this is not a legal study, it does not attempt to further judge or negate the appropriateness or correctness of the sentence given to them by the judicial institutions.  However, it offers new ways of understanding the circumstances of the women in prison and, in a more focused manner, of women on the death row from a gender and rights-based perspective.

The study posits a framework that locates the situation of women on the death row from a gender perspective anchored on an understanding of human rights and specifically focused on the issue of gender-based discrimination.  Before this study, there has been no known local literature on women in prison or women on death row that has advanced a gender and rights-based framework.

The team, after reviewing and discussing in depth the four case studies presented in a separate section, concludes that a gender and rights-based perspective could perhaps illuminate the circumstances of the case study respondents in particular before and during their imprisonment and find the appropriate lessons towards improving the justice system.

The study is divided into the following parts: Introduction to the Research, which covers a brief discussion on the objectives of the study, scope and limitations, and research design, activities and process; Part I: Review of Literature discusses the following areas: Death Penalty Law in the Philippines, Death Penalty in the Philippines vis-à-vis International Human Rights Standards, and a specific section on women on death row; Part II is a discussion on the Research Findings from Official Records and Survey of Women on Death Row, and includes a general profile of women on death row, and discusses the impact of death penalty on women offenders.  Part III presents the four case studies (Catherine, Hope, Marie and Shirley); the case studies, a distinct but integrated section, attempt to highlight the lives of four women before their imprisonment and during their current incarceration. Part IV is the Discussion of Findings, while Part V presents the Conceptual Framework; Part VI is a brief section on Recommendations and Concluding Notes.  The report also includes Annexes and References in Part VII.

Objectives of the Study

The general objective of the study is to give a situationer of the women on death row, taking note of the women-specific issues in the discussion of death penalty and prison life in general.

Specifically, the study aims to:

1.    present a general profile of women on death row;
2.    describe the circumstances that led to their incarceration and eventual death sentence, from the standpoint of the women on death row;
3.    describe the impact of their sentence on their self-perception and relations with their significant others (e.g., natal families, intimate partners, children); and
4.    discuss the gender aspects of death penalty and prison life in general.

In addition to the stated objectives of the study, the following are the more specific details defining the parameters of the research:

2.    The participation to the research was opened to all women death row inmates at the Correctional Institution for Women (CIW).  However, only 12 participated in the research.

3.    Only one case per criminal offense represented in the CIW death row was made into a case study.  These crimes are murder, parricide, drug-related offense and kidnapping.

It should also be underscored that while advocating for the abolition of the death penalty, the study does not aim to prove or disprove the innocence of the women on death row.  Instead, the study aims to derive from the women’s life stories conceptual and theoretical handles with which to view women offenders vis-à-vis death penalty from a rights and gender-based perspective.

The study was done over a 13-month period, although the primary data gathering activities (e.g., interviews) covered only five months.

The study builds on the life story approach to describe the situation of the women on death row.  As such, it relied heavily on interviews with the women on death row who participated in the study.  Case studies were also undertaken to provide a more in-depth view and points for analysis.

1.    Review of available foreign and local literature on death penalty, women in prisons (if not specifically on women and death penalty), and pertinent laws

2.    Interviews with the women on death row

3.    Collateral interviews with the family, relatives, friends and/or lawyers of the inmates selected for case studies

5.    Validation of case studies and debriefing with the research participants

Process of the Study

A study on women on death row had several built-in constraints, such as the inability of the research team to discuss and include in the reports certain details of the inmates’ lives and cases that both the respondents and researchers thought might jeopardize ongoing court appeals.  There are given limitations in terms of the inmates’ accessibility to meet and spend time with the researchers, and, more importantly, their willingness to be part of the study, which may require them to recall specific circumstances in their lives that they may understandably prefer to forget.

Women on death row are considered inmates in isolation, with the highest security level required (see Annex 2, Republic Act 7659; Annex 3, Republic Act 8177; Annex 4, Implementing Rules and Regulations of Republic Act 8177).  Thus, the difference in their treatment compared to regular inmates.  As a matter of policy, they are not easily and immediately accessible to their visitors and guests, unlike other prisoners.  The participation of women on death row in activities conducted or sponsored by outside organizations or by their guests is subject to security clearance and other protocols, including a prior approval from the head of the CIW and the Secretary of Justice.  It must be noted though that once the Secretary of Justice had approved of this research, the CIW officials and personnel proved to be cooperative.

While awaiting the official approval, the research team already began preliminary activities such as gathering the profiles of some women inmates on death row from the Bureau of Corrections, conducting initial review of existing literature about women in prison and developing the research design.

Another meeting was scheduled, specifically with the women on death row, to introduce the research team and orient the inmates to the study.  During this orientation meeting, staff of PhilRights and the project researchers had the chance to interact with and listen to the women’s concerns and hesitation in becoming part of the study.  The research team emphasized that the participation in the research is not mandatory, and that, should they choose to participate, the principle of confidentiality will be observed.

An interview guide was drafted based on the preliminary data gathered from the social worker’s case files as well as the legal case files, where available (See Annex 7, Research Instruments).  Of the 30 death row inmates, only 10 initially agreed to be part of the study.  Researchers clustered them based on their cases and scheduled them for interview by cluster.

During a briefing, the research team informed the inmates about their interview schedules as well as the manner of conduct of the interview.  The consent of the respondents was taken during the tape recordings of all the interviews.  While the interviews were dutifully recorded to ensure the integrity of the data, the research team agreed to practice judicious discretion.  Parts of the narratives were kept off the record – specifically those referring to intimate details of the inmates’ personal relationships with husbands and/or partners, which the researchers deemed as very intimate facts, or to aspects of their legal cases that, if made public, might jeopardize the inmates’ ongoing court appeals.

The interviews were completed in three weeks.  By the first week of December 2004, all 10 inmates have been interviewed.  Four additional inmates agreed to participate in the interviews a week later; however, two of them backed out at the last minute.  Thus, all in all, 12 women on death row were interviewed for the study.

Debriefing and exit interview with all the inmates was conducted on 25 December 2004, after which a Christmas party was celebrated with them.

Budget constraints also limited the potential interviewees for the case studies, i.e., the interviewee and her family had to be Luzon-based.

Upon selection of the inmates and their consequent approval, the team finalized the guide questions and immediately started interviews in January 2005.  Each of the four researchers was responsible for setting the interview schedule with the individual respondent.

The length of interviews depended largely on the agreement between the specific researcher and the respondent(s).  There were also collateral interviews with family members, friends and lawyers of the inmates.  The researchers had to contact them and set interview appointments.  The depth and the number of these interviews conducted per case study varied.  Not all people targeted for the collateral interviews were located, available, or in some cases, willing to be interviewed.  With regard to family members and friends who were reached, their reactions to the interviews varied from reluctance to eagerness to share what they know of the inmate and her case.  However, a common observation of the researchers on the interviewees was their lack of understanding of the legal process and the proceedings that brought their loved one to death row.

By the end of March 2005, transcription of the actual interviews with inmates, their families and some of the respondents’ lawyers were completed. .In April 2005, the writing of the first drafts of the case studies and the research report commenced.  When the researchers required more data, additional visits to CIW were conducted.

In May 2005, the researchers conducted validation interviews during which the initial drafts were presented for comments and additional information as deemed necessary by the respondents.  An exit interview with all the inmates who participated in the research was also conducted in May.