LIVING IN THE MARGINS
Economic, Social and Cultural Rights in an Urban and a Rural Community 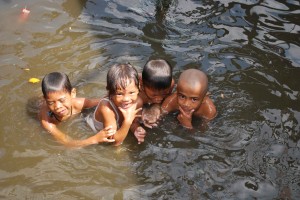 Economic, social and cultural rights (ESCR), like civil and political rights, constitute a set of rights that human beings must possess in order to enjoy a life with dignity. Virtually all international human rights instruments starting with the Universal Declaration of Human Rights (1948) recognize that not only should people realize and enjoy civil and political rights and freedoms like the rights of suffrage, to peaceful assembly and association, freedom of expression and religion, but also the rights to food, adequate housing, education, health and social security.

The development of human rights after World War II has shown the uneven treatment and importance given to ESCR by States and even NGOs. This is illustrated by the general vagueness and weakness in contents, meaning, standards and norms of this set of rights. The body of jurisprudence on ESCR was also wanting due to the hesitancy and difficulty of legal practitioners in handling and pursuing cases of this nature. Moreover, it was only on December 10, 2008 that the UN General Assembly adopted by consensus the Optional Protocol to the International Covenant on Economic, Social and Cultural Rights (ICESCR), consequently establishing a complaint procedure for “victims of ESCR violations who are not able to get effective remedy in their domestic legal system to seek redress at the international level.”

The above state of ESCR is very much true in the Philippines. Not only has the State viewed and treated these rights as goals and aspirations; it has also perpetuated the marginalized status of ESCR, primarily through the overall weakness of the country’s justice system in advancing and promoting these rights. This is manifested with the seeming non-recognition of ESCR as rights, more so their justiciability, as evidenced by the dearth of jurisprudence on cases related to these rights. Concomitantly, members of the Philippine criminal justice system like judges and prosecutors do not have the proper orientation and training in hearing and prosecuting cases on violations of ESCR.

Another glaring indication of the marginalized status of ESCR in the country is the limited mandate of the Philippine Commission on Human Rights (PCHR) as set forth in the 1987 Philippine Constitution. Article 13 Section 18(1) stipulates that among the powers and functions of the CHR shall be to: Investigate, on its own or on complaint by any party, all forms of human rights violations involving civil and political rights. Clearly, the powers of the commission are restricted to accepting complaints and conducting investigations only on cases related to the violations of civil and political rights (CPR). Legislative action is needed to amend and expand its mandate to include ESCR.

The promotion of ESCR entails taking decisive actions to substantiate and provide the much-needed push to realize its justiciability in order for people to claim and enjoy these rights. It requires satisfying and putting in place the important requisites, including raising people’s awareness and capability in human rights monitoring and documentation. And this is an area of human rights work where PhilRights commits itself in pursuing and building its niche. The Philippine Human Rights Information Center (PhilRights), as the research and information arm of the Philippine Alliance of Human Rights Advocates (PAHRA), recognizes its role and contribution in the mainstreaming and promotion of ESCR.

As a concrete manifestation of the institution’s continuing commitment to the promotion of ESCR, we have embarked on this important research on the state of ESCR in an urban and a rural community, with the objective of further clarifying the nature of this set of rights, determining the level of enjoyment of these rights and establishing the strengths, gaps and weaknesses in State compliance. With this institutional undertaking, we believe that PhilRights has made a meaningful contribution to the social movement working towards the advancement of economic, social and cultural rights in the Philippines.

This report focuses on economic, social, and cultural (ESC) rights, specifically on the rights to food, housing, work, health, and education. In the Philippines, respect and fulfillment of these rights lag far behind that of civil and political rights (CPR), including freedom of speech, freedom from torture, right to peaceful assembly, among others.

A consequence of this disparity is the absence of a human rights framework in the government’s development agenda and socio-economic programs. This absence of a human rights framework is apparent in the lack of urgency and clear accountability in the government programs meant to alleviate poverty and create opportunities for Filipinos, especially those in the fringes of society.

Another manifestation of ESCR’s ‘underdevelopment’ in the country is in the area of justiciability. Because ESC rights standards and parameters have not been fully developed, jurisprudence on these rights, particularly in the Philippines, is not as rich and substantial, especially when compared to civil and political rights jurisprudence. Despite existing policies upholding ESC rights, few cases have been brought before a tribunal to address violations of these rights and make violators face the bar of justice.

For example, the Philippines has an Urban Development Housing Act (UDHA) which protects urban poor dwellers against illegal and forced evictions.  Despite the law, summary and illegal demolition of shanties in Metro Manila and in other urban areas continue. No violator has been prosecuted.

Moreover, the Philippine judicial system (specifically judges, lawyers and prosecutors) needs to be oriented on the theory and practice of judicial procedures related to violations of ESC rights, even as it continues to build jurisprudence on civil and political rights.

This point has been stressed by Prof. Marvic Leonen of the University of the Philippines College of Law, who cited the case of Simon vs. CHR:

Not only is there no court or tribunal in the Philippines mandated to try on an exclusive basis, cases involving ESCR, the justiciability of ESCR is not quite settled. For one, unless there is a statute providing sanctions and penalties for violations of each provision touching upon an ESCR, it would appear that one cannot just go to court, invoke an ESCR demand that he be accorded the benefits, or recover damages, for a violation of such right.

As a result of this disparity in the promotion of these two sets of rights, monitoring and documentation of the state of human rights in the    Philippines has been traditionally confined to civil and political rights.

Human rights are inherent entitlements, birthrights and freedoms, which every person should possess and enjoy by virtue of having been born a human being. These entitlements provide the bases or foundation of a life in dignity. After World War II, human rights have been emphasized as legal and normative guideposts that should provide the minimum standards by which States are to treat their citizens.

In 1948, the UN General Assembly ratified the Universal Declaration of Human Rights (UHDR) which established the vision and principles that ground human rights. UDHR recognizes both civil and political rights (CPR) and economic, social and cultural rights (ESCR), emphasizing the interdependence and indivisibility of these two major categories of rights.

Civil and political rights include, among others, the rights to life, free speech, due process and peaceful assembly.

ESC rights, articulated in Articles 22-27 of the UDHR, refer to those rights which guarantee everyone with socio-economic opportunities, allowing individuals and families to live adequately and with dignity.  These are the rights which need to be enjoyed by individuals in order for them to grow and develop as active and productive members of their communities and society, and include, among others, the rights to social security, work, equal pay for equal work, rest and leisure, standard of living adequate for health and well-being, education, and the right to participate in the cultural life of the community.

Economic, social, and cultural rights were expounded by the International Covenant on Economic, Social and Cultural Rights (ICESCR) which was adopted by the UN General Assembly on December 16, 1966 and entered into force on January 3, 1976. The ICESCR is the major international HR law articulating the legal, political and moral bases of these rights. It likewise stipulates State obligations to ESCR and the peoples’ responsibilities in claiming these rights and demanding State accountability. At present, 137 states have ratified the ICESCR, including the Philippines.

The next fifty years after the establishment of UDHR saw various elaborations on international and national instruments regarding ESCR. Like civil and political rights, ESC rights have legal bases expressed and guaranteed by law, in the forms of treaties, international laws, covenants, general principles and other sources of international law. International human rights laws lay down obligations of States to act in certain ways or to refrain from certain acts, in order to promote and protect human rights and fundamental freedoms of individuals or groups.

ESC rights are also recognized in the Convention on the Rights of the Child (CRC), Convention on the Elimination of all Forms of Discrimination Against Women (CEDAW), and in numerous conventions of the International Labor Organization (ILO). Recognition of ESC rights has likewise been affirmed in various international human rights conferences and in regional and national laws.

These treaties oblige States to intervene actively in order to create the conditions necessary for human development. States are required to formulate laws, policies, and programs and to allocate resources, structures, and personnel to ensure that people enjoy these rights.  Regardless of level of development and resource constraints, a State party is duty-bound to fulfill the minimum core requirements that its people must enjoy to live a life in dignity. These include available foodstuffs for the population, essential primary health care, basic shelter and housing, and basic elementary education.

The realization of ESCR requires the satisfaction of certain elements or what are referred to as “normative contents” as defined in the General Comments formulated by the UN Committee on ESCR. Specifically for the rights to food, health, education and housing, the following normative contents must be considered and satisfied in order for these rights to be fulfilled:

3. Acceptability: which includes appropriateness in terms of culture, gender and age; and