RESTORATIVE JUSTICE
Legal Framework and Practices in the Philippines

The involvement of the Philippine Human Rights Information Center in the campaign to abolish the death penalty in the Philippines has expanded the institution’s human rights advocacy. Its engagement with the State in having Republic Act 7659 or the Death Penalty Law abolished has deepened its understanding of the character and dynamics of the Philippine criminal justice system, particularly its punitive and retributive orientation.

Exposure to the weaknesses and defects of the Philippine criminal justice system and its bias against the economically disadvantaged members of society has convinced PhilRights of the need to work towards the re-orientation of the current system and the importance of exploring available alternatives to its punitive and retributive nature. Thus, the institution, in collaboration with the Ateneo de Manila Human Rights Center (AHRC), embarked on an exploratory study on restorative justice as a viable option that can be developed and eventually mainstreamed in the Philippine criminal justice system.

As indicated in the study objectives, the research is an initial effort of PhilRights to determine existing laws, practices, structures and mechanisms, both in the dominant criminal justice system and in indigenous communities, that contain elements or features of restorative justice and how these can be further enhanced and expanded.

It is the intention of the institution that with this study, we can identify areas for changes and innovations that will ultimately result in the re-orientation of the Philippine criminal justice system, one that is based on a restorative justice framework and consistently guided by and anchored on human rights principles and standards.

PhilRights is aware that the abolition of the death penalty in the country is but an initial step in the long and arduous struggle in instituting meaningful reforms in the Philippine criminal justice system. We believe that with this publication, we are taking another step towards that direction, and we encourage others to join us in this journey.

Even if viewed as a newly-emerging response to the problems of crime and criminality, restorative justice has had a long history of application and practice. This study looks at the country’s criminal and penal regimes in order to locate the embryonic stages of restorative justice principles in its formal laws and indigenous modes of conflict management. 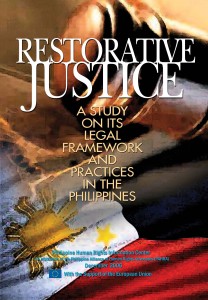 The study starts out with a discussion on the concept of restorative justice, from its precursors among all the major ancient civilizations, to the modern concept as it is presently advocated worldwide. The experiences of New Zealand and Canada, two of the major front-runners in the swing towards the restorative ethos, are presented.

The chapters on the Philippine criminal justice system, while providing an abbreviated look at the country’s imperfect judicial system, also point out that the introduction of a better (that is, restorative) framework is not at all impossible. Briefly, laws that are not inconsistent with restorative justice principles are reviewed, among them, the Katarungang Pambarangay Law, the Indigenous Peoples’ Rights Act, the Alternative Dispute Resolution Act and the new Juvenile Justice Law.

Having looked at the laws, the study then pinpoints the rudimentary workings of restorative justice as lived realities in the grassroots, specifically as practiced by the Katarungang Pambarangay’s Lupong Tagapamayapa and the indigenous peoples of the Cordilleras and Mindanao. A major portion of the book consists of case studies of conflict resolution and dispute settlement as applied by the communities in Besao, Mt. Province and Buguias, Benguet (for indigenous communities in northern Luzon), and the Maguindanaons of Sultan Kudarat and Mamasapano in Maguindanao province and Tedurays (for indigenous communities in Mindanao). While restorative justice as formally defined may not be explicitly enunciated in the process and outcome of grassroots (barangay and indigenous community) judicial processes, the promise of a healing kind of justice is not too improbable. No matter how rudimentary, some form of restorative justice somehow arches over the judicial practice among the indigenous peoples and in those areas where the Katarungang Pambarangay is fully functional.

The study notes that the Revised Penal Code is the major stumbling block to the mainstreaming of a healing brand of justice. As long as the RPC and the criminal justice system operate within an adversarial framework, restorative justice cannot take a firm foothold. The RPC notwithstanding, other laws have incorporated restorative principles. The newly minted Juvenile Justice Law of 2006, for example, articulates restorative justice ideas. Also, with the Katarungang Pambarangay and the dynamic mechanisms among indigenous peoples that are both informed – to a certain extent – by a healing kind of justice, it is not far-fetched to expect the transformation of the methods of justice in the country.

In the final chapter, policy recommendations are spelled out, to allow restorative justice to make inroads into the punitive nature of the Philippine justice system.

The Philippine Human Rights and Information Center (PhilRights) is the research and information service arm of the Philippine Alliance of Human Advocates (PAHRA). Established in July 1991, it has been active in the campaign to abolish the death penalty through the network of Mamamayang Tutol Sa Bitay – Movement for Restorative Justice (MTB-MRJ) which it serves as secretariat. 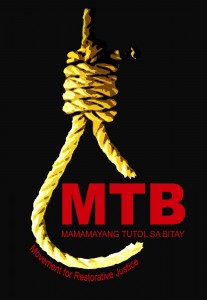 MTB-MRJ is a network of more than fifty (50) people’s organizations, non-governmental organizations, government agencies and other human rights institutions advocating for the repeal of the death penalty law. The MTB-MRJ includes among its members the Ateneo Human Rights Center (AHRC), a university-based institution engaged in the promotion and protection of human rights in the Philippines.

Although the campaign is primarily geared towards the abolition of the death penalty, MTB-MRJ is also seeking to introduce long term reforms in the entire criminal justice system of the Philippines. The network is also pushing forward the campaign on restorative justice system, which is the framework by which the anti-death penalty advocacy is anchored upon.

The prevailing justice system in the country is punitive and retributive in nature.  As such, it allows little room for genuine healing. On the other hand, the restorative justice system, while recognizing that crimes are wrong and should be prevented, also acknowledges that these are primarily offenses against human relationships. The fact that these are violations of existing laws comes as only secondary to this consideration.

Contrary to human rights principles and standards, the punitive and retributive nature of the Philippine criminal justice system poses major obstacles and difficulties in enabling the State to respect and protect the human rights of its citizens, both offenders and victims of crimes. Abusive law enforcement agencies, expensive and prolonged litigation processes, corrupt and incompetent prosecutors and judges, inhuman and cruel treatment of prisoners, and many other flaws and weaknesses in the justice system are just a few of the common problems suffered by ordinary citizens in their quest for justice and reparation. Money, connections and power are among the key elements which determine and define what kind of justice will be served and how soon it will be granted. Thus, consistently, the criminal justice system has worked against the interests and violated the rights of the poor and the marginalized members of society.

Furthermore, the country’s criminal justice system has been anchored on the values of revenge and retribution and has put prime importance to punishment and maintenance of law and order. The promotion of human dignity in the resolution of crimes has been a secondary concern, if not an afterthought. Apprehending and punishing criminals at all cost have been the overriding concern since this is viewed as the means to stop the proliferation of crimes and to demonstrate the toughness of the State in dealing with offenders.

State accountability with respect to the safety and security of its citizens and the creation of an enabling environment for the enjoyment of human rights has likewise been shunted aside, since the focus is on the nature of the offense/crime and the commensurate punishment for it.

Inasmuch as restorative justice is viewed as a newly-emerging response to the problems of crime and criminality, particularly in the Philippines, there is a need to clarify the concept and bring it within the grasp of its potential beneficiaries, and the general public.

The study, however, limits itself to a review of the major laws and institutions dealing with offenses which either embody principles of restorative justice in their framework or use the latter as a process. Other forms of conciliation or mediation which may be restorative in nature in other fields of law have been excluded. The discussion and analysis of the gaps and problem areas of the Philippine Criminal Justice System is likewise not exhaustive nor extensive. However, it provides a general overview of the present opportunities, challenges and practice of restorative justice.

Restorative justice processes, as practiced by the indigenous cultural communities and the Katarungang Pambarangay, are likewise examined, specifically to identify areas where principles of restorative justice may be further enhanced.

As regards indigenous practices, the focus is on the indigenous groups in the Cordillera Administrative Region (CAR), particularly in the areas of Besao, Mountain Province and Buguias, Benguet, and on the Maguindanaoans and Tedurays in Mindanao.

With regard to the case studies and practices of Indigenous Peoples, the focus of such was more to identify practices which led to a settlement. The case studies, however, did not analyze whether all of the practices were indeed in line with restorative justice principles. Moreover, the cases presented here did not look into the impact of the settlement on the victims and offenders alike. While it would have been informative to examine the impact of case settlement on all the parties involved (victim, offender, their families, and their community) and describe post-settlement developments, these are concerns that were beyond the scope of the study.

To illustrate the restorative justice practices in the Katarungang Pambarangay system, four (4) pilot barangays were scrutinized:

All the four identified barangays have been consistent recipients of the Lupong Tagapamayapa Incentives Award which was established by the Department of Interior and Local Government to recognize the barangay’s exemplary performance and contribution in promoting the Katarungang Pambarangay’s objectives. These barangays, therefore, are not representative of what the rest of the Katarungang Pambarangays in the entire country have accomplished in terms of applying restorative justice principles and processes. Being Lupong Tagapamayapa Incentives awardees, these selected barangays represent the extent to which the barangay justice system has implemented a restorative justice framework in the Philippines.

VI.    The Laws and Practices Through a Restorative Justice Lens
a.    Legal Framework
b.    Practices
i.    Indigenous Communities
ii.    Katarungang Pambarangay