IT’S RAINING COINS: A QUICK LOOK AT THE 4PS

BEFORE BEING part of the Conditional Cash Transfer (CCT) program, Aling Marci, a resident of Navotas, had a difficult time providing for all the needs of her family. To earn a few pesos, Aling Marci would repack chlorine which she sold around her neighborhood every morning. The money she earned provided for her younger children’s allowance for their afternoon classes. Her husband works as a teacher. It was not a very comfortable life, she said. The eldest of their four children had to quit school because of financial difficulties. 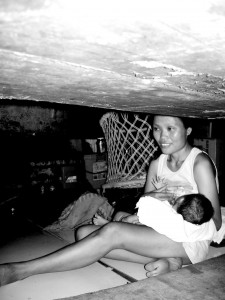 Today all her four children are in school, even the eldest one. Every three months, she gets an allowance of Php3300, P1100 for each month for the education and health needs of her two children in the 5-14 age bracket. She admits some of the money is used for the welfare of the other children, such as the school needs of the eldest child and to supplement financing for the basic needs of the family.

Marci is the focal leader of 27 household-beneficiaries of the Pantawid Pamilyang Pilipino Program (4Ps) in Daang-Hari, Navotas. While leading and coordinating with these families is volunteer work, she gets to attend trainings provided by the Department of Social Welfare and Development (DSWD) which she says enhances her skills as a mother and as a woman. These trainings range from women’s rights, to livelihood trainings and leadership seminars.

Lourdes is one of the women in Marci’s group. She has three children, the youngest of which is two years old. Her husband works in construction and she stays at home to take care of the family. She says aside from the money, the program has increased her awareness of her children’s needs. “Kailangan pala, regular yung pagpapatimbang at pagpapa-checkup.”

Marci and Lourdes were part of the 2008 Conditional Cash Transfer Program, back in the time of Pres. Gloria Macapagal Arroyo. In 2008 they were part of a survey which collected their demographic profiles. They did not know what the survey was for. Marci remembers that the whole neighborhood was surveyed, although some refused to be part of the survey. It was only a few weeks later when they were asked to go to the municipal hall and were given an orientation about being part of the CCT program.

Implemented in 2008 by the DSWD after a quick pilot study, the CCT program covers children 5-14 years old. Its goal is to provide for the immediate basic needs of the poorest families, and thus to invest in human capital in the long term by breaking the ongoing cycle of poverty in these communities. The program focuses on the health and education needs of children in these families. Subject to the compliance of conditions, household representatives receive a corresponding amount of money. Up to three children can be included in the program, with P500 given for health needs and P300 for educational needs. P1400 is the maximum amount a family can receive in a month.

Under this program, families are to ensure that children aged 6-14 have an 85% attendance in school and those aged 3-5 attend preschool, that children below 5 are given immunization and older children avail of deworming pills. Pregnant women have to avail of maternal care.

Aside from this, household representatives, mostly mothers, are required to attend monthly Family Development Sessions where they are given seminars on women’s rights, livelihood and others. This also becomes the venue for the household representatives
to converse with DSWD social workers and voice out their concerns. Marci shared that they were also asked to sign an agreement by the DSWD promising not to drink liquor or gamble.

According to Marci and Lourdes, there are separate monitoring teams in the school and health center to see whether children are complying with the requirements. Non-compliance in either health or education conditions would result in the withdrawal of corresponding cash assistance.

Pouring cash to the poor

President Aquino continued and expanded Arroyo’s CCT program. With increased loans from the Asian Development Bank, DSWD Secretary Dinky Soliman estimated that the 4Ps program would benefit some 2.3 M families by the end of 2011. From a budget of 10B in 2010, 23 billion was allotted for 2011. An additional 4B is allotted for trainings of implementers.

The increased budget allotted for the program has been criticized by a lot of sectors, including NGOs, lawmakers and even from former president Arroyo. One of the strongest criticisms is that the program merely functions as a dole-out, giving short solutions to the poor while wreaking havoc on the long term with massive debt sourced from outside. Social Watch Philippines’ study on 4Ps beneficiaries revealed that while the beneficiaries were grateful for cash grants, they said that what would lift them from poverty would be access to decent and regular employment.

Ibon Foundation’s position paper, “Conditional Cash Transfers and the Persistence of Poverty”, stated that CCTs remain as dole-outs because families get cash unrelated to their labor. It is also discretionary and not sustainable in the long run, the think-tank said.

Seven representatives of the party-list groups Bayan Muna, Gabriela, Anakpawis, Alliance of Concerned Teachers and Kabataan released a joint press statement in October 2010 calling for the scrapping of the CCT program as it does little in enhancing the
long-term social security of the Filipino people. The party-list representatives pointed out that “Not only does the 21 billion dole-out offer an empty promise of alleviating poverty, it further contributes to the country’s worsening financial health with its added burden of multibillion loans from international financial institutions.”

What’s in a word:
containment vs. reduction

Walden Bello of Akbayan addressed the dole-out criticism, saying it reeks of middle-class insensitivity to the poor’s plight. In his article, “The CCT Debate and the Coalition against the Poor” published in the Philippine Daily Inquirer, Bello further addressed criticisms of the CCT having only short-term benefits and hence incapable of solving the problem of poverty in the long run. Bello said the program is for poverty containment rather than poverty reduction.

Marci said she had heard of the dole-out sentiment from other people, but dismissed it by saying that they also have to work for the cash transfers. “Hindi yun dole-out kasi may counterpart kami.” She said that they have to comply with the rules, such as regular check-up for children, minimal absences in school and attendance in monthly family development sessions. Household heads are likewise prohibited from gambling and drinking.

Concerned organizations headed by Bayan Muna have expressed fear of possible corruption in the 4Ps program. Corruption may come from the patronage system where favored politicians’ areas are given precedence over the areas which are more in need. According to the group, the CCT program “strengthens the corrupt patronage system as politics will dictate who gets access to these programs.”

The parties questioning the implementation of the 4Ps program said that investment in social security institutions would be a more viable and empowering alternative to CCTs. This would mean giving a bigger chunk of the budget to public hospitals and universities to fund better facilities and ensure quality medicines and services. SWP suggests using the funds for job generation. The Global Call to Action against Poverty wants a wider 4Ps program, one that would include provisions for livelihood.

There have also been calls for widening the scope of the target population for programs like 4Ps, to include, among others, the increasing number of out-of-school youths.

Something to tide them over

Marci is aware of the bad press surrounding the program. But she insists most of these are unfounded. She is aware that the money for beneficiaries can be misused, and even recounts an incident where a family went straight to Jollibee after withdrawing their cash assistance. However, for most, she says the 4Ps program is an extended lifeline. “Mas nabibigay namin ngayon yung mga kailangan ng mga anak namin. Kaunting pera lamang iyon pero malaking tulong,”

The program has become beneficial not only to the families but also to the community. Marci and Lourdes said that they have noticed a gradual yet consistent change in their neighbors. Because they are no longer allowed to drink or gamble, it has become more quiet during the evenings, Lourdes says. She admits however, that this prohibition cannot be forced upon their husbands.

For Marci and Lourdes, the 4Ps program has significantly helped their families and they can only hope that the program will live out its five-year span. They are aware that it cannot directly pull them out of poverty. “Lagi kong sinasabi sa mga pamilya, pantawid lang yan. Hindi yan lang ang dapat inaasahan ninyo,” Marci said.