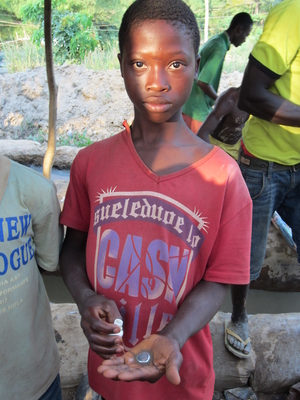 Governments worked long and hard to craft this treaty, so what are they waiting for. Mercury pollution is a global problem that can only be addressed by global action.

(New York) – Governments should make an urgent commitment to protect people from the harmful effects of mercury by signing and ratifying the new Minamata Convention on Mercury, Human Rights Watch said today, on the eve of a high-level UN event about the treaty. The Minamata Convention, adopted in October 2013, obliges governments to reduce mercury use and emissions globally and is an important tool to protect the right to health.

“Governments should seize the moment and sign the mercury convention now,” said Juliane Kippenberg, senior children’s rights researcher at Human Rights Watch. “They should make a firm commitment to protect people and environment from the poisonous and even deadly effects of mercury.”

Human Rights Watch has documented the harmful effects on humans from using mercury in small-scale gold mining – the biggest sector using mercury globally – in Mali, Nigeria, Ghana, Tanzania, and Papua New Guinea. An estimated 10 million to 15 million people in Africa, Asia, and Latin America rely on mercury as a cheap and easy method for extracting gold. Mercury is particularly harmful to children. It can delay development and cause illness, disability, and even death.

The new international convention – named after one of the worst mercury poisoning disasters in history, in the Japanese town of Minamata – addresses the use of mercury in small-scale gold mining in various products and processes and in emissions from industrial facilities. With regard to small-scale gold mining, the treaty requires governments to draw up national action plans that include steps to eliminate the most harmful forms of mercury use, promote mercury-free mining methods, protect children and women of childbearing age, and seek to improve the health of miners.

So far, 102 governments have signed, but many others have not, including governments that have a significant role to play in reducing mercury exposure globally. Among those that have not signed are:

“Governments worked long and hard to craft this treaty, so what are they waiting for,” Kippenberg said. “Mercury pollution is a global problem that can only be addressed by global action.”

The convention is only open for signature for one year, until October 9, 2014. While a government signature is not legally binding, it is an important political commitment and often the first step towards making the convention legally binding for the country. After October 9, countries that have not signed can become parties by acceding to the convention by depositing an instrument of accession. Those who have signed can become parties by ratifying.

The convention will enter into force when 50 governments have ratified it. So far, only the United States has taken that legal step to become a party to the convention, though many other countries are preparing the treaty for parliamentary approval.

“Governments have an obligation to protect people’s right to health,” Kippenberg said. “Tomorrow they can take an important step toward that goal. The victims of mercury poisoning deserve no less.”