MANILA, Philippines – Days after launching a national campaign on the right to adequate food, leaders of the newly-formed National Food Coalition (NFC) pitch five essential elements or components of a framework for a national program to achieve the country’s goal of rice self-sufficiency.

Aeta women attending the launching of the National Food Campaign. Access to adequate food remains one of the biggest problems among Indigenous Communities in the Philippines. (Photo: Bobby Diciembre)

NFC conveners wrote a letter to Pres. Benigno S. Aquino III and made the pitch, which is “based upon our long experience in the countryside and the urban areas to ensure food on our tables and also backed up by close study and research.” 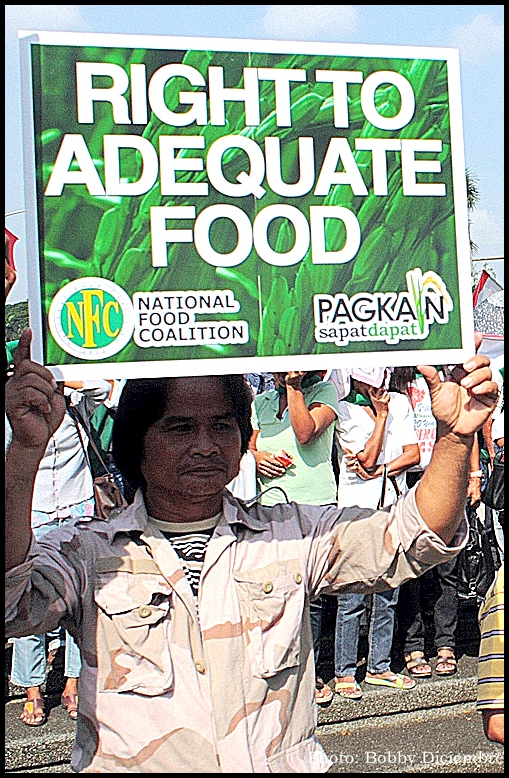 NFC stressed that the rice self-sufficiency program can only be achieved if, first, it is anchored on farmers owning the land they till.

“Inclusive growth in this area cannot exclude the rice producers, particularly those who still await the completion of the Comprehensive Agrarian Reform Program with extension and reforms (CARPer).  Such a move needs the support of direct services, the insufficiency or the absence of which in the past eroded if not nullified the benefits to farmers.  Landownership and government support will progressively raise the farmers’ savings and incomes and also reduce the number of impoverished people,” NFC said.

Second, the rice self-sufficiency program must be less dependent on oil-based production and increasingly becoming organic. 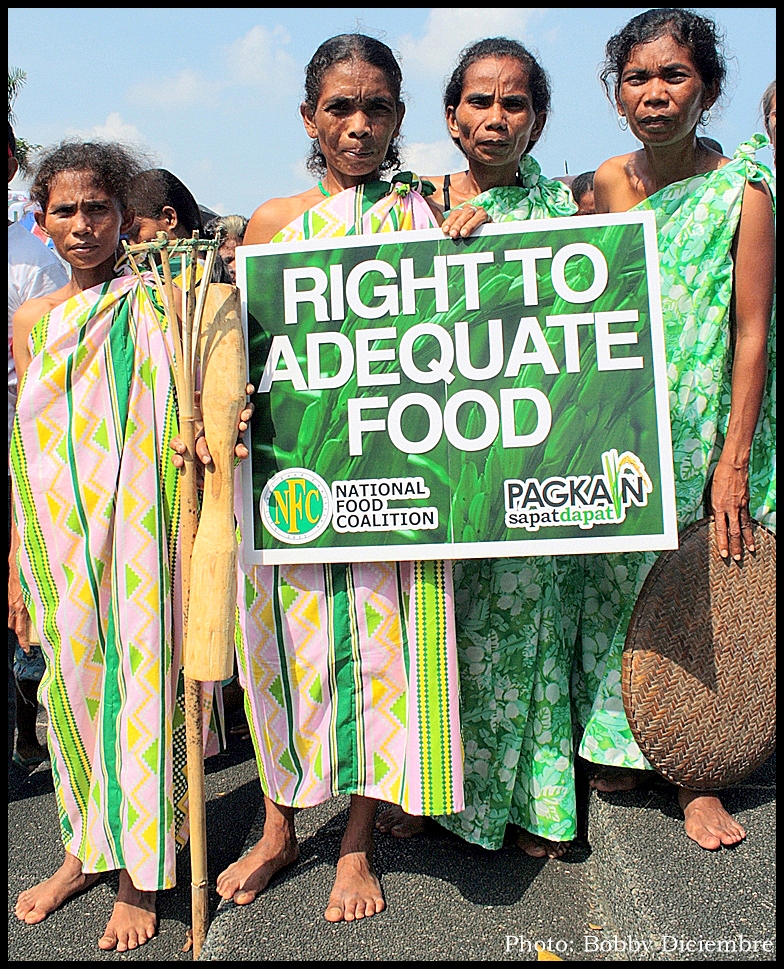 ADEQUATE FOOD. Women members of an Aeta tribe from Zambales join the National Food Coalition (NFC) during the launch of a national campaign on the right to adequate food. According to NFC, it is our right to live in dignity, free from hunger, food insecurity and malnutrition. Food should be available, accessible and adequate for all Filipinos. (Photo: Bobby Diciembre)

“There is already an extensive showcase that organic rice production is not only viable but also more productive and healthier.  The current yield of most organic farms is 4.5 to 5 tons per hectare.  With government support, 7-8 tons per hectare could be harvested.  Dependence on high-breed rice varieties that require more expensive petro-chemical fertilizers is radically reduced,” the group said.

Third, the government must decisively address the threats of climate change on irrigated areas. 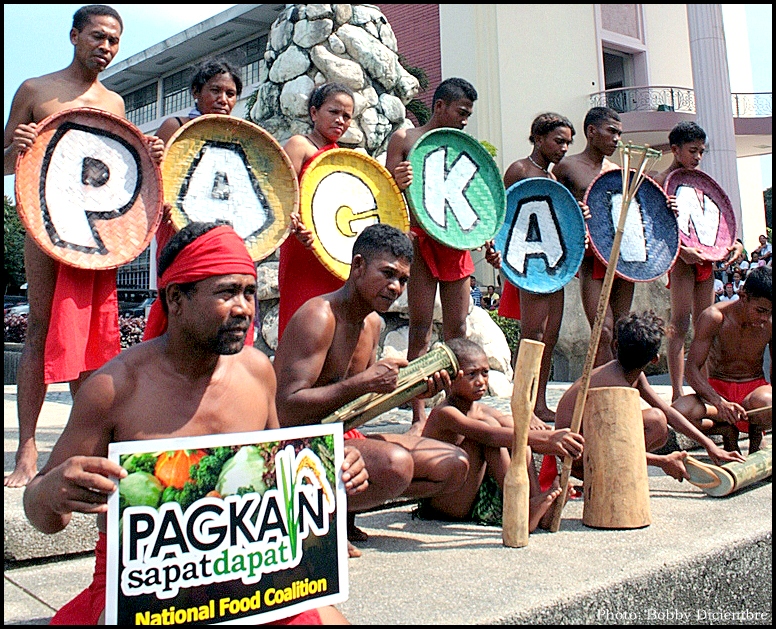 Citing Bureau of Soil and Water Management (BSWM) data, the group said that 2.32 million hectares, or 74.52%, of potentially irrigable areas are at risk to climate change.

“The decimation of our forests by, among others, illegal logging and mining, which greatly contributes to the destruction of rice crops, must be decisively and justly addressed,” NFC added.

Fourth, rice self-sufficiency can be achieved if it is drawn from consultations with rice farmers, especially those still under the agrarian reform program completion areas. 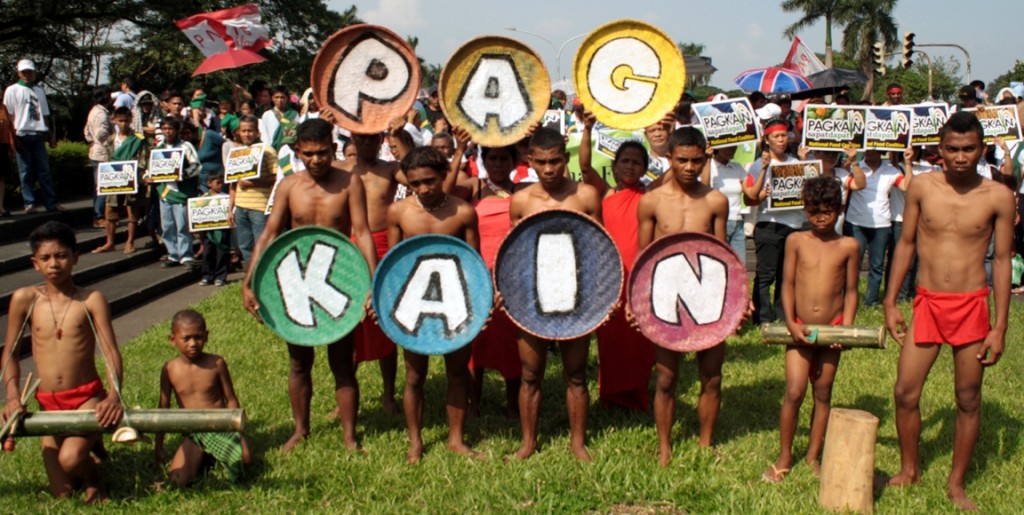 Members of an Aeta tribe from Bataan join the National Food Coalition (NFC) during the launch of a national campaign on the right to adequate food. According to NFC, it is our right to live in dignity, free from hunger, food insecurity and malnutrition. Food should be available, accessible and adequate for all Filipinos. (Photo: Bobby Diciembre)

“It is imperative that any National Rice Sufficiency Program should be coming from and uplifting the quality of life of the millions of poor farmers and their families,” the group said. They also expressed willingness to lend a hand to the government with these consultations with farmers.

Last, the group wanted the government to respect the ancestral land of the indigenous people. This can be done if the government fulfills its obligation to protect it from destructive mining industry, illegal logging, and from the spread of genetically modified organisms (GMOs) in the Philippines.

FIAN’s Miclat-Teves stressed that crafting such a policy needs the full and active participation of all actors concerned, especially those most vulnerable to hunger. The proposed national food policy must conform with the recommendations of the United Nations Committee on Economic, Social and Cultural Rights (CESCR) in General Comment No. 12 (1999) and the FAO’s Voluntary Guidelines on the Right to Food (2004). 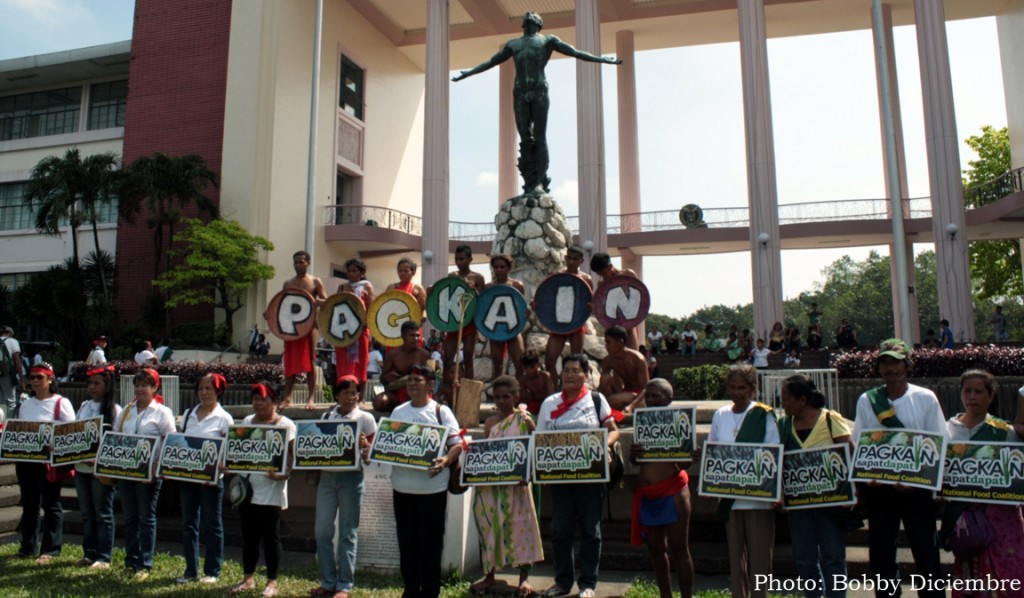