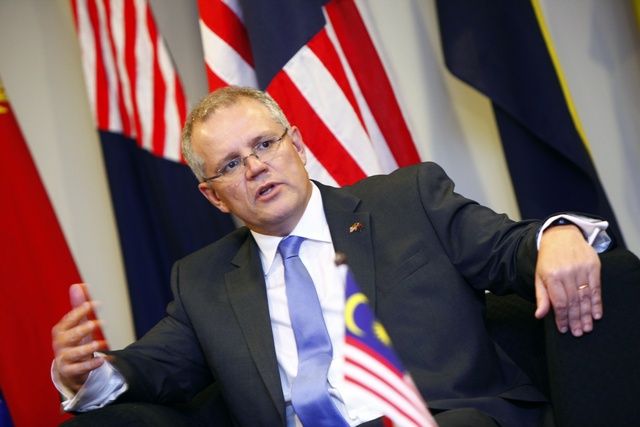 Australia’s deal with Cambodia will send people to a country that has a terrible record for protecting refugees and is mired in serious human rights abuses. Australia should have examined these refugee claims itself instead of diverting asylum seekers to Nauru, but at least it should take those found to be refugees instead of shipping them off to Cambodia. Despite Canberra’s claims, the reality is Cambodia is both unsafe and ill-equipped to handle large numbers of refugees who will be given one-way tickets to Phnom Penh.

(Sydney) – A new refugee agreement between Australia and Cambodia does not meet Australia’s commitment to send refugees to a “safe third country,” and will undermine refugee protection in the region, Human Rights Watch said today. A Cambodian government press release states that the Australian immigration minister, Scott Morrison, will sign a Memorandum of Understanding on the settlement of refugees in Cambodia with the Cambodian interior minister, Sar Kheng, in Phnom Penh on September 26, 2014.

Australia and Cambodia have not released the terms of the agreement. However, Morrison has previously said that up to 1,000 asylum seekers sent by Australia to Nauru, where they have been recognized as refugees, may be transferred to Cambodia on a “voluntary basis.” Although Cambodia is a party to the 1951 Refugee Convention, it has failed to protect refugees and asylum seekers, returning them to countries where they faced persecution.

“Australia’s deal with Cambodia will send people to a country that has a terrible record for protecting refugees and is mired in serious human rights abuses,” said Elaine Pearson, Australia director. “Australia should have examined these refugee claims itself instead of diverting asylum seekers to Nauru, but at least it should take those found to be refugees instead of shipping them off to Cambodia. Despite Canberra’s claims, the reality is Cambodia is both unsafe and ill-equipped to handle large numbers of refugees who will be given one-way tickets to Phnom Penh.”

Since September 2012, Australia has been sending asylum seekers who arrive by boat to Nauru and Papua New Guinea to be screened there for refugee status. Under the terms of an agreement with Nauru, Australia is committed to helping settle refugees to “a third safe country.” Australia has refused to accept returning anyone found to be a refugee to Australia on the grounds that it is pursuing a regional burden-sharing solution. As of August 31, 2014, 1,233 asylum seekers are detained in Nauru. As of September 18, 2014, the Nauru government has carried out 250 status determinations, 206 of whom have been recognized as refugees.

Australia will be failing to meet the terms of its agreement because Cambodia is not a safe third country.

The Australian government has referred to the transfer to Cambodia as resettlement. However, a spokesman for the United Nations refugee agency, UNHCR, has described resettlement in Cambodia as not being a “durable” solution. “It’s not in the spirit of resettlement,” the spokesman said.

Cambodia has not demonstrated the willingness or ability to provide refugees adequate protection. Some recognized refugees resettled in Cambodia live in fear and self-isolation because the Cambodian government has shown a willingness to collude with countries of origin to have refugees returned, despite their status. As a result, refugees may be afraid to leave their places of residence, preventing them from working and reducing them to severe poverty.

In recent years the government has sent vulnerable people back to countries where they faced abuse, such as China and Vietnam. In December 2009 Cambodia handed over 20 ethnic Uighurs, whom UNHCR regarded as persons of concern, to Chinese government officials, who then returned them to China to secret trials and long prison sentences.

There is concern for the refugees once they arrive in Cambodia. The Cambodian and Australian governments have provided no information regarding refugees’ access to housing, education for children, medical care, and basic livelihoods. The Australian government has not shared details about the status of negotiations and contents of the agreement, nor has either country sought public input for the proposal.

The overall poor human rights situation in Cambodia raises further concerns about the security of refugees transferred there. The Hun Sen government severely restricts the rights to freedom of expression, assembly, and association, and state security forces routinely commit killings, torture, and other abuses with impunity. Those living on the margins – including refugees and asylum seekers lacking employment, Khmer language skills, and a social network – are at particular risk. For instance, Human Rights Watch has documented the arbitrary arrest, detention, and mistreatment of “undesirables” housed in squalid detention centers run by the Social Welfare Ministry, where beatings, torture, and rapes by guards go unpunished.

“Instead of answering questions about the treatment of refugees in Cambodia, the Australian government has shut down any public discussion of these issues,” Pearson said. “Australia is finding a new excuse to palm off the refugee problem rather than genuinely finding a regional solution that will involve Australia doing its fair share.”