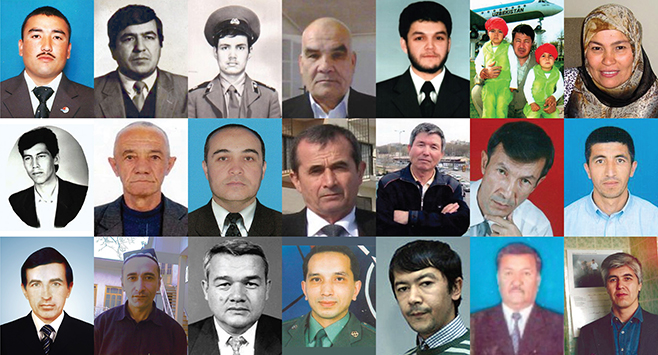 (Warsaw) – Human rights activists, journalists, and others imprisoned by the Uzbek government on politically motivated charges suffer torture and abysmal prison conditions. The prisoners’ sentences are often extended arbitrarily for years. Uzbekistan has one of the world’s worst human rights records and has unlawfully imprisoned thousands of people for the peaceful exercise of their freedom of expression.

The 121-page report, “‘Until the Very End’: Politically Motivated Imprisonment in Uzbekistan,” presents disturbing new findings about the treatment of 34 of Uzbekistan’s most prominent people imprisoned on politically motivated charges. They include two of the world’s longest imprisoned journalists and others who have languished behind bars for more than two decades. Based on more than 150 in-depth interviews, including with 10 recently released prisoners, and analysis of newly obtained court documents, the report extensively documents the plight of many wrongfully imprisoned activists.

“The Uzbek government tries to hide the abuses its critics suffer in prison, even their very existence, from the world,” said Steve Swerdlow, Central Asia researcher at Human Rights Watch. “This new evidence means Tashkent can no longer pretend that politically motivated imprisonment in Uzbekistan does not exist.”

The prisoners Human Rights Watch profiled include some of Uzbekistan’s most talented and remarkable figures; uncovering corruption, seeking democratic reform, or leading innovations in the arts, culture, or religion and philosophy. Some were imprisoned for no other identified reason than that the government considered them “enemies of the state.” The government has used overly broad and ill-defined charges of “anti-constitutional activity” and “religious extremism” to imprison many of them. Others were sentenced on fabricated charges of bribery, fraud, or extortion.

At least 29 of the 34 current prisoners whose cases Human Rights Watch documented have made credible allegations of torture or ill-treatment. They have been beaten with rubber truncheons or plastic bottles filled with water and tortured with electric shock, hanging by wrists and ankles, threats of rape and sexual humiliation, asphyxiation with plastic bags and gas masks, threats of physical harm to relatives, and denial of food or water.
Azam Farmonov, a rights activist behind bars since 2006, alleges that police placed a sealed mask on his head to simulate suffocation and beat him on his legs and feet to force a false confession. He said that during pretrial custody, he had been beaten on the head with plastic bottles filled with water and that Uzbek security services officers threatened to drive nails into his toes, as well as to harm his loved ones. Following the torture he suffered, according to his wife, Farmonov said to her at his trial, “I will hold out until the very end.”

Human Rights Watch found that authorities punish those imprisoned on politically motivated charges by routinely extending their prison sentences for years, often just days before they are to be released, on insignificant and often farcical grounds. Officials extended the sentence four times for a peaceful opposition figure, Murod Juraev, imprisoned since 1994, most recently in 2012, for infractions including “incorrectly peeling carrots” in the prison kitchen.

The report documents the cases of five prisoners whom Uzbek security services kidnapped from other countries, forcibly returning them to Uzbekistan in the absence of legal proceedings.

Some of those imprisoned on politically motivated charges suffer from serious illnesses and have been kept in solitary confinement for long periods or denied adequate health care or medical treatment. Their treatment could constitute cruel, inhuman, or degrading treatment, a serious violation of Uzbekistan’s international human rights obligations.

Abdurasul Khudoynazarov, a rights activist, died 26 days after he was released in May 2014, the day prison doctors diagnosed him with advanced liver cancer. He told rights groups before his death that officials consistently denied his requests for medical treatment throughout his 8 years in prison.

At least 18 of those profiled were denied access to counsel at critical stages of their cases, and eight were held incommunicado for up to a year. Authorities have refused to reveal the whereabouts of Akram Yuldashev, a religious leader, since 2009, and it is unclear whether he is dead or alive. Under international law, authorities commit an enforced disappearance when they refuse to acknowledge holding someone in custody or conceal the person’s fate or whereabouts, thereby placing them outside the protection of the law. “Disappearances” increase the likelihood of torture or other ill-treatment, Human Rights Watch said.

“Torture, kidnapping, incommunicado detention, solitary confinement, and extension of sentences are all unspeakable abuses that no one should suffer,” Swerdlow said. “Whether behind bars for 20 years or a shorter time, these people have been wrongfully imprisoned and shouldn’t spend even one more day behind bars.”

Uzbekistan’s refusal to release and end its abuses of people imprisoned on politically motivated charges has not substantially affected its relationships with Washington, Brussels, or other European capitals. Most have apparently seen the country’s importance as a transit route to Afghanistan as the priority, especially ahead of the troop withdrawal by many Western countries in 2014.

Nor has the government faced concrete consequences for its systematic failure to cooperate with the United Nations Human Rights Council, denying access for the last 12 years to 11 UN human rights experts who have asked to visit.

Uzbekistan’s international partners should press the government to urgently improve its human rights record, including freeing people held on politically motivated charges. These countries should be prepared to impose targeted restrictive measures such as visa bans, asset freezes, and restrictions on military assistance to Uzbek government bodies and officials found to be responsible for egregious human rights abuses. Members of the UN Human Rights Council should seek to establish a special rapporteur devoted to Uzbekistan’s atrocious human rights situation.

“The US, EU, and other key governments know all about President Islam Karimov’s use of prison and abuse to stamp out independent journalism, human rights monitoring, and political and religious freedom,” Swerdlow said. “Uzbekistan’s international partners need to tell President Karimov that there will be a serious price to pay unless his government stops imprisoning and torturing peaceful activists, journalists, and religious believers.”