Food self-sufficiency target next year good, but without basis – NFC

The claim of Agriculture Secretary Proceso J. Alcala that rice self-sufficiency is achievable next year is “a farce and without basis.”

This was according to the newly-founded National Food Coalition (NFC), in reaction to the pitch made by Secretary Alcala on the occasion of the World Food Day when he encouraged small farmers and fishers to organize themselves into cooperatives so they could benefit from the so-called “economies of scale.” Alcala said that farmers’ cooperatives will continue to play a major role and contribution in attaining the Aquino administration’s goal of attaining sufficiency in rice and major staples by end of 2013. 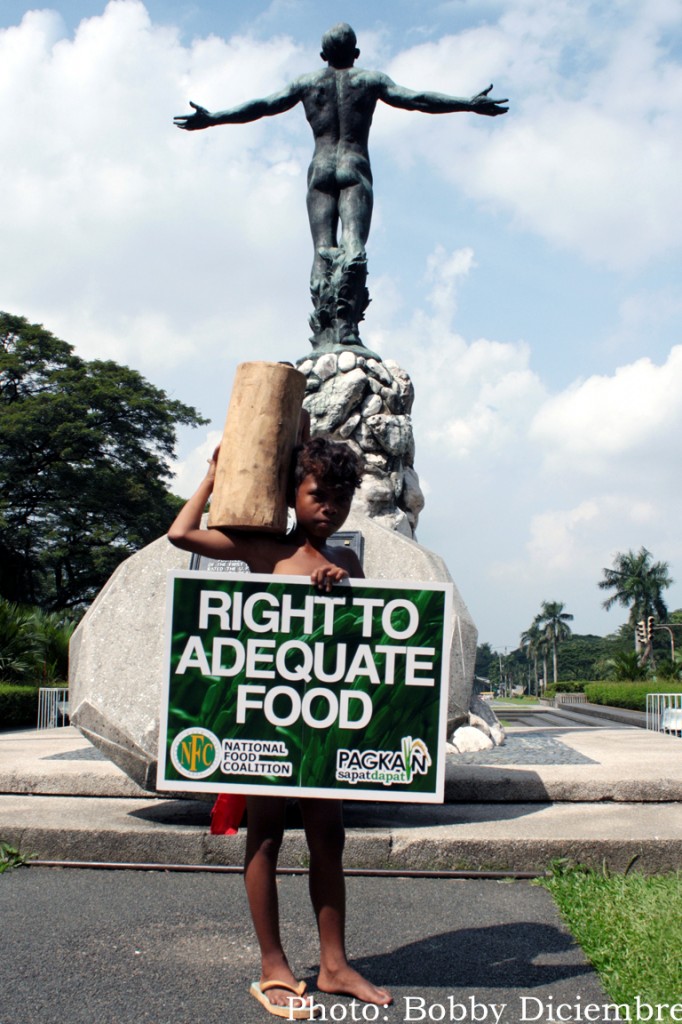 FOOD ALERT: An Aeta child during the launching of the National Food Campaign. Access to adequate food remains one of the biggest problems among members of Indigenous Communities in the Philippines. (Photo: Bobby Diciembre)

Romeo Royandoyan, NFC co-convenor, said that there is nothing wrong in aiming for food self-sufficiency, especially rice, but it is important to make a realistic assessment of the situation.

“We are for food self-sufficiency. We want a nation with zero incidence of hunger. The claim of the administration that rice self-sufficiency is achievable in 2013 is a farce and without basis. Maybe they are the ones experiencing hunger because they are already hallucinating,” said Royandoyan, also executive director of research and advocacy organization Centro Saka, Inc.

“Even the Task Force on Rice and Other Staples of Agriculture and Fisheries 2025 has raised doubts about the target of achieving rice self-sufficiency by 2013 or 2014. To attain rice self-sufficiency, palay production growth should average at least 7.10% per annum as against the historical growth rate of 3.4% per annum,” he added.

Citing Philrice data, he said that the level of Philippine food self-sufficiency continued to slide from 91% in 1990 to 80% in 2010.

Royandoyan said that organizing farmers’ cooperatives and building infrastructure to enhance productivity, such as irrigation and post-harvest facilities, are important, but “the essential key to food (rice) sufficiency is ensuring the economic rights of the farmer or agricultural producer to own the means of production or the land they till.” 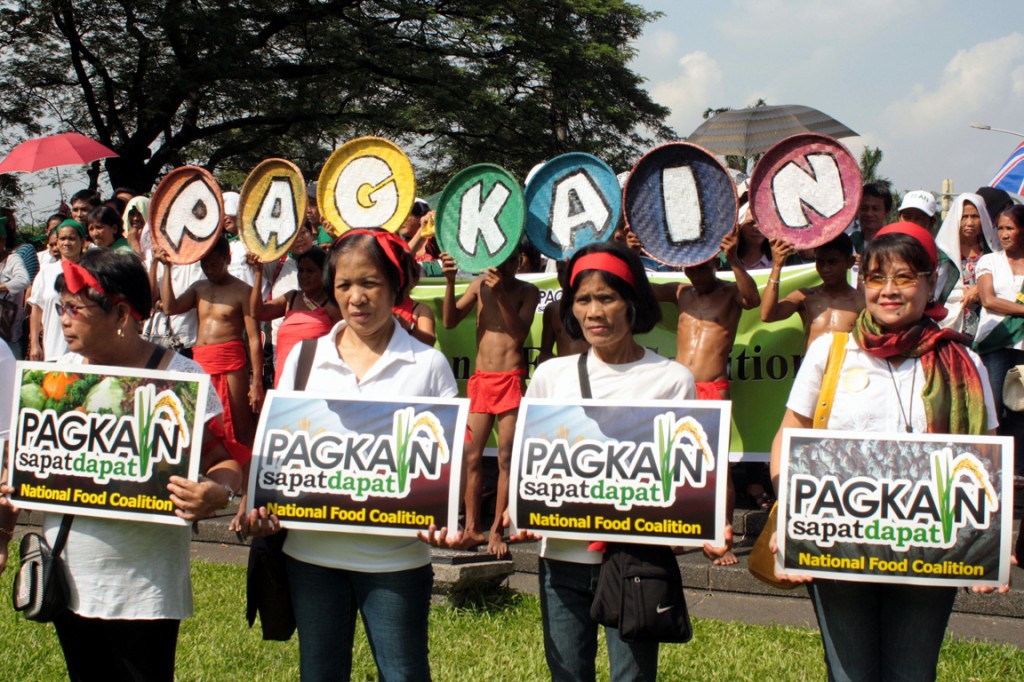 ADEQUATE FOOD. Members of the National Food Coalition launch their campaign on the right to adequate food. According to NFC, it is our right to live in dignity, free from hunger, food insecurity and malnutrition. Food should be available, accessible and adequate for all Filipinos. (Photo: Bobby Diciembre)

“Owning the means of production is crucial in rice production and in building a democratic and prosperous countryside. Why? Poverty and resource conflict are related causes of food crisis. Left unresolved, the 2007-2008 food crisis can recur. Any rice program or any production sufficiency related program that disregards the property rights (land ownership) of producers as critical factor will ultimately falter,” Royandoyan explained.

Max de Mesa, co-convenor of NFC and chairperson of Philippine Alliance of Human Rights Advocates, thus lamented that the World Food Day celebration of the government failed to accelerate the distribution of 1.5 million hectares to land reform beneficiaries to boost food production.  Such a move by government could have progressively fulfilled further its obligation to the right to adequate food.

Credit of insurance and marketing support

According to Centro Saka, another factor that limits the productive capacity of rice farmers is the lack of credit of insurance and marketing support, a component that is hardly recognized as critical to addressing food sufficiency. 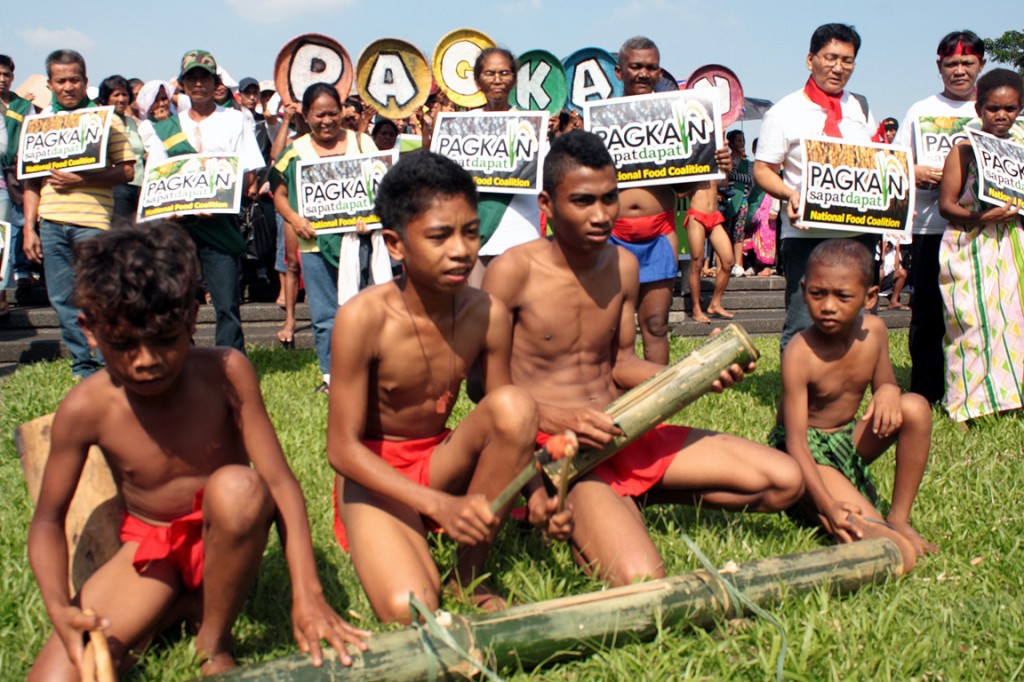 Members of an Aeta tribe from Bataan join the National Food Coalition (NFC) during the launch of a national campaign on the right to adequate food. According to NFC, it is our right to live in dignity, free from hunger, food insecurity and malnutrition. Food should be available, accessible and adequate for all Filipinos. (Photo: Bobby Diciembre)

“Marketing/credit support program will ensure that farmers have access to affordable and timely resources, the twin partner of land ownership and land productivity. Whoever controls the marketing–trading enterprise controls the rice industry. So, to ensure the success of any rice program, direct support to rice farmers should be given utmost priority,” Royandoyan said.

The group also urged the government to support the shift current farming practices to organic farming to address problems of low yield and high cost of production, low income and savings among farmers, and of an agriculture that is oil-based. 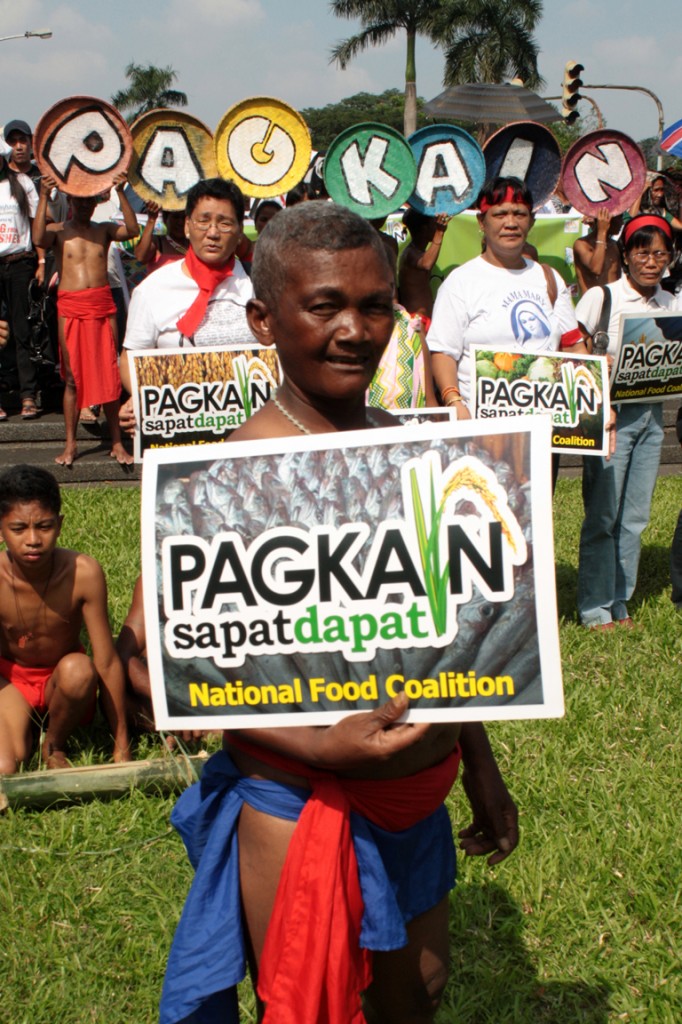 A leader an Aeta tribe from Bataan holds a sign during the launch of a national campaign on the right to adequate food. According to National Food Coalition, it is our right to live in dignity, free from hunger, food insecurity and malnutrition. Food should be available, accessible and adequate for all Filipinos. (Photo: Bobby Diciembre)

“One can say Philippine agriculture is basically oil-based. The current food production input regime relies heavily on chemical fertilizers; hence their respective prices are directly proportional. If a farmer reduces his use of fertilizer, his output will decline which means low income and savings for him. Lower income and vulnerability to risks like extreme weather force a farmer to borrow money from loan sharks and the cycle of debt traps among farmers continues,” said Royandoyan.

Another critical factor why attaining food self-sufficiency is not attainable next year is that irrigated lands are at risk to climate change.

Citing data from Bureau of Soil and Water Management, the group said that 2.32 million hectares of potentially irrigable areas or 74.52% are at risk.

Royandoyan explained that these areas are prone to crop failures brought on by excess rainfall and high temperatures (rainfall variability), serious damage to standing crops and infrastructures (incidence of super typhoons), deep and prolonged floods and landslides, and increasing temperature and extreme dryness during dry months will cause higher decline in dam water, soil moisture and cause crop moisture requirements to rise. 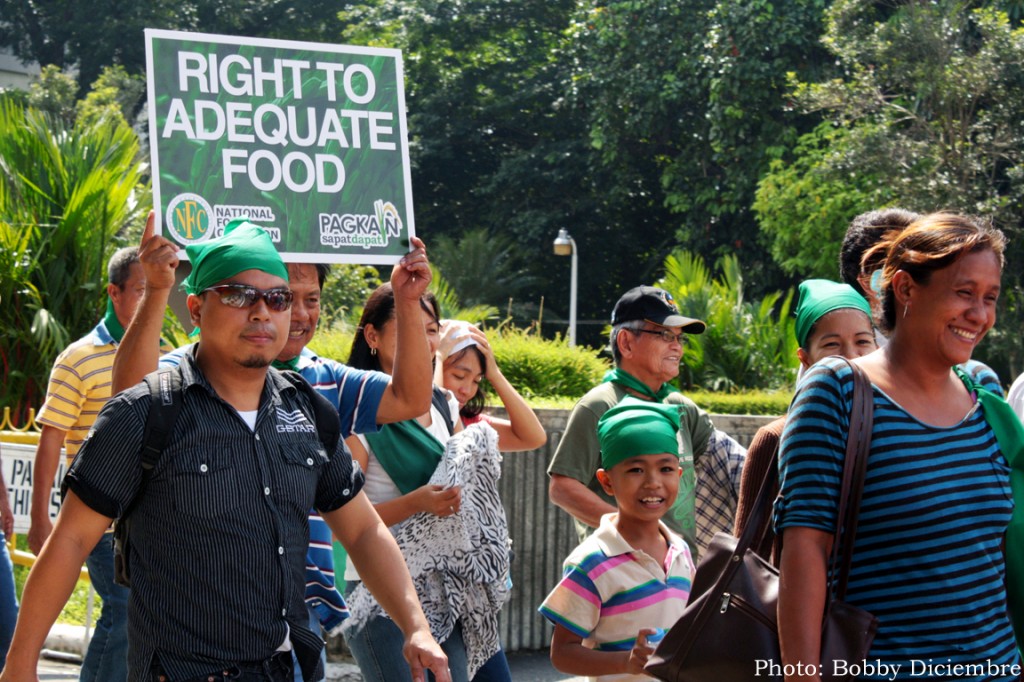 “Irrigated lands at risk to climate change may also be a source of resource conflict,” he said. “During dry months when water (dam) level is low, the need for power generation and domestic water are prioritized over irrigation. Most of our dams are now privatized.”