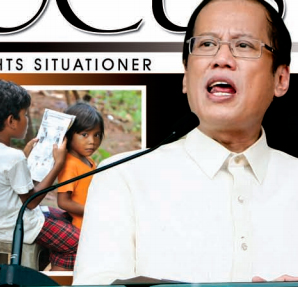 THE CHANGING OF THE GUARD: HUMAN RIGHTS UNDER A NEW PRESIDENT

For most Filipinos, 2010 promised a lot of changes. Mid-way through the year, the electorate voted for new officials, from the president to the municipal council, in the first-ever automated elections in the country.  For those who had long hoped for a change in administration, the end of the decade-long presidency of Gloria Arroyo could not come too soon enough.

While human rights was not exactly on the top agenda of most of the candidates, whether national or local, the HR community still looked forward to how the elected officials would tackle the tattered human rights record of the country.

Threats to life and liberty continued. The Task Force Detainees of the Philippines (TFDP) details in “NOT QUITE OVER THE HUMP YET” a number of civil and political rights violations it had documented in 2010. As TFDP points out, the Aquino administration has yet to make public its policies regarding human rights.

Cecilia Soriano describes the roadblocks to attaining universal primary education, a commitment under the Millennium Development Goals (MDGs). “IN THE MARGINS OF LEARNING” details the various obstacles to achieving education for all, and warns that the country’s failure to provide free basic education to its young population can only mire more people in the vicious cycle of poverty and disenfranchisement.

In “PICKING UP THE CRUMBS”, Raffy Hipolito looks at the failures of the Accelerated Hunger Mitigation Program (AHMP) in solving hunger and malnutrition, and challenges the new administration to formulate a comprehensive, long-term plan that would solve the basic food needs of some 12 million food-poor Filipinos.

The Medical Action Group (MAG) details the ills of the health care sector in the country, where health is more a privilege than a basic right. In “CHALLENGES IN ATTAINING UNIVERSAL HEALTH CARE IN THE PHILIPPINES”, MAG presents a number of ways by which the government can put in place the foundations of universal health care for its citizens.

John Francis Lagman dissects the problem of housing, especially for the urban poor population, in “ANATOMY OF THE NATION’S HOUSING PROBLEMS”. The article calls attention to an unrecognized crisis: the growing number of homeless persons and the lack of a coherent strategy and policy to address the problem.

Finally, Sonny Melencio examines the situation of workers in 2010 “THE RIGHT TO WORK UNDER THE AQUINO GOVERNMENT”. In describing the plight of some 3,000 employees of the Philippine Airlines, the article depicts the woes that plague workers in the Philippines in general – woes that are compounded by the seeming indifference of the Department of Labor and Employment, the agency tasked to protect the rights of workers but whose decisions tend to favor the cause of employers.