Youth participants of the Juvenile Justice Volunteers Congress renewed their opposition to the proposed lowering of the Minimum Age of Criminal Responsibility (MACR) from 15 years old to 12 years old.

Organized by the Humanitarian Legal Assistance Foundation (HLAF), the three-day congress included a Color Your World Activity, an immersive experience for the participants that also served as a reminder that treating children as criminals deprives them of a colorful life and a bright future.

Marichris Arienda, president of the Children World Aid Program from Bicol, also graced the event as she presented the film “Rehas” in support of the campaign to strengthen the Juvenile Justice and Welfare Act. Nicole Arienda, youth representative of the Children World Aid Program reminded the participants, “We need to fight for our rights pero ‘wag din natin sanang kalimutan yung mga responsibility natin.” 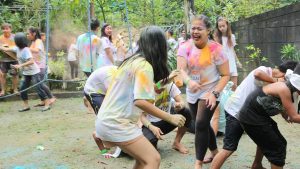 Youth delegates also came up with a performance that reveals their stand and advocacy about juvenile justice. Presentations were showcased in the structured socialization night. Youth participants from Brgy. Culiat, Quezon City also showcased their talents as they entertained everyone with a theater performance depicting the current issues faced by the youth today. As one of the participants stated, “Everyone is an artist and everything is art.”

Since 2012, HLAF has been providing a venue for all the children and youth members organized by the barangays that the organization has trained in the annual Juvenile Justice Volunteers’ Congress to get together and share ideas with having in mind the right of children to participate in matters that affect them.

HLAF is a non-profit, non-government organization that advocates for the protection and promotion of the rights of persons deprived of liberty especially the children, the elderly and those who are sick.  One of HLAF’s programs, the Center for Restorative Action Program, empowers the Barangay Council for the Protection of Children (BCPC) in different barangays to be able to implement the Juvenile Justice and Welfare Act (JJWA). HLAF also sees the need to conduct activities which involves children to prevent them from being juvenile delinquents and serve as role models not only to every child but to be responsible citizens of the nation as well.