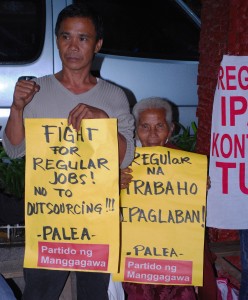 PAL management calls it a “difficult but necessary transition.” We at the NGO-PO ESC Network see it as a blatant violation of the right to work and a frontal assault against dignity of labor.

Come October 1, 2011, two thousand six hundred (2,600) regular employees of the Philippine Airlines (PAL) would have been retrenched and replaced by contractual workers as a result of this streamlining scheme.

The ESC Network, composed of around fifty (50) human rights groups, people’s organizations and NGOs, fully supports the work stoppage of PALEA members that started yesterday morning. We call on the Pnoy government to honor the country’s obligations under international human rights instruments particularly the International Covenant on Economic, Social, and Cultural Rights (ICESCR) which it ratified way back in 1974. We call on the Pnoy government to uphold the right to work of all PALEA members by putting a stop to labor contractualization and finding a meaningful solution to the PAL crisis.