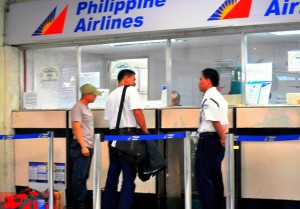 LIKE EXCESS BAGGAGE? Some 2,600 PAL employees will lose their jobs if the airline implements its "restructuring of operations" by spinning off its Airport Services, In-flight Catering and Call Center Reservations units.

Saying that workers’ rights and dignity should be the priority of the Pnoy administration, several human rights groups expressed dismay over the recent Malacañang ruling upholding the Philippine Airlines’ move to sub-contract its Airport Services, In-flight Catering, and Call Center Reservations Units. According to the PAL Employees Association (PALEA), this spin-off plan could lay off 2,600 workers.

The NGO-PO Network for Economic, Social, and Cultural Rights, a broad coalition of around fifty (50) civil society organizations, also announced that it will provide full support to PALEA’s impending strike in the next few days.

ESCR-Asia, Inc. chairperson, Minerva G. Gonzales pointed out that “In upholding management’s decision of laying off some 2, 600 employees of Philippine Airlines, the Office of the President forgets, nay betrays, the social justice framework of the 1987 Philippine Constitution.”

Meanwhile, Max de Mesa of the Philippine Alliance of Human Rights Advocates (PAHRA), also a member of the ESC Network, stated that “prioritizing business over human rights, which translates to sacrificing workers’ job security for profit, is unacceptable.”

The ESC Network officers also reminded President Aquino that the Philippines has signed and ratified way back in 1974 the United Nation’s International Covenant on Economic, Social, and Cultural Rights (ICESCR) which guarantees workers’ right to full and decent work, including security of tenure.

The Network’s spokesperson, Nymia Pimentel Simbulan, said “we demand accountability from the Pnoy government to honor its human rights obligations to the Filipino workers by reversing its decision and stopping the contractualization of labor in PAL.”

She added that the government’s ruling on PAL is an open declaration of support to labor contractualization and directly undermines the right to security of tenure of workers. She also noted that this is a dangerous precedent that could be used by companies to intensify sub-contracting schemes.

Simbulan said that her group is supporting the PAL workers’ planned strike because it “is the only viable option left to them when their rights are violated and abused, they have no other recourse but to claim their rights through a strike.”