Spatial information is becoming more relevant to human rights advocacies because space as a concept allows human rights organizations to comprehend the what and why and how of the country’s human rights situation. The question of where is therefore one that human rights defenders must seek to know, understand, and analyze. In this light, unveiling spatial distributions, patterns, connections, and interactions must then be strategically incorporated by human rights organizations in the pursuit to inform, educate, document violations, provide services to the victims and families, and seek accountability for the injustices carried out by the State.

The Concept of Space

Before we go further with spatial information, let us first define the concept of space.

Space is a container of all activities where interactions, connections, and other processes occur. In a human rights context, space is the site where the duty bearer and the rights holder meets to navigate the social contract. The relationships that exist between the two actors serve as the manifestations of how they come together to define the space that protects human dignity. In the context of the so-called war on drugs, it is clear that spaces of fear, injustice, and impunity are prevailing and developing.

Understanding, describing, and documenting these spaces then become urgent concerns for the human rights movement.

Spatial information deals primarily with location of phenomena, objects, and places on the Earth’s surface, or space.  In most literature, location can be either absolute or relative.

Absolute location is identified by the exact coordinates of a phenomenon, object, or place. It is the intersection of the longitudinal and the latitudinal position with respect to the Earth’s Prime Meridian and Equator. Using absolute location to map out human rights violations is preferred when high precision is required.

In using the prepositions such as near to, far from, beside, and in front of, we are describing locations relative to certain landmarks. This is what we refer to as relative location. Landmarks such as bodies of water, famous buildings, and even people function as reference points.

Knowing the absolute and relative locations of incidents—important places of human rights violations—gives us insights not only on where they are happening, but also on how organized and distributed they are on a particular space.

The organization and distribution of phenomena, objects, and places on space display identifiable patterns based on their clustering. They may be randomly or uniformly clustered. Uniformly clustered spatial entities are often planned or follow natural laws, and they can also be highly or sparsely clustered. By identifying clusters, concerned CSOs and State agencies may determine areas of high priority. For example, the high occurrence of pathogen-caused deaths in place X can inform the government where to focus medical resources such as personnel and medicines to prevent further deaths and the spreading of disease.

ABS-CBN’s Investigative and Research Group released one of this method’s earliest applications on the so-called war on drugs in July 2016, mere weeks after the deadly campaign’s official start. The piece is a collection of maps and charts that collated known and available data of “drug-related fatalities” from May 10, 2016. It includes a choropleth map—one with shaded areas to indicate a statistical variable on the map, in this case the density of an area’s drug-related fatalities—that shows the regional distribution of reported deaths. Regions with high clustering of drug war-related fatalities include Central Luzon, Cordillera Administrative Region, National Capital Region, Regions 4-A(CALABARZON) and 4-B (MIMAROPA), Western Visayas, Eastern Visayas, Northern Mindanao, and SOCCSKSARGEN. See the full map here.

Aside from clustering, patterns may also refer to the geometric and orientational characteristics of distribution on a given space. This way of describing distributions is commonly applied in transport planning as people tend to follow certain paths in moving from their origin to their destination. For human rights work, geometric and orientational characteristics of distribution may be used to identify the pattern of movement of documentors and service providers in order to reduce spatial bias (e.g. their north-south movement deprives those who are in need of documentation and services in the east and west).

The establishment of correlations—determining relations of one event or process with another—offer opportunities for human rights work. For example, human rights defenders claim that extrajudicial killings (EJKs) are mostly happening in urban poor communities. To prove this to be true, we must compare if the number of EJKs is correlated with prevalence of poverty measured by household income, barangay poverty rates, or qualities referring to poverty such as materials used to build houses and access to utilities. In this way, we are already taking into account the socioeconomic context of EJKs and the other rights violations experienced by the people living in these communities.

Other important factors that can be included in analyzing spatial relationships include gender and sexuality, ethnicity and race, and age. Ergo, the opportunity to correlate human rights violations with discrimination, marginalization, and neglect is indeed far-ranging.

Spatial distributions, patterns, and relationships do change through time. Therefore, there is an inherent connection between space and time that human rights defenders must take into account. This is especially crucial in monitoring human rights conditions over time. An example of this would be creating a series of maps showing the number of EJK victims at specific time periods.

In PhilRights’ own documentation work, for example, we have found out that over time, provinces like Bulacan are still experiencing high rates of extrajudicial killings. To properly depict the claim, a series of maps can be shown at specific time periods that reveal the rates of EJKs in the concerned provinces. This will inform the public and civil society organizations that these are the areas that need attention and help.

Geospatial technologies are modern tools that human rights defenders may use to record, analyze, and visualize spatial information. Examples include Global Positioning System (GPS), Remote Sensing, and Geographic Information System (GIS). These technologies may seem intimidating at first, but they are already becoming part of our everyday lives thus making them easier to adopt for specific advocacies.

Global Positioning System (GPS) is a system composed of satellites, transmission towers, and receivers. It is commonly integrated in our smartphones, which functions as a receiver, making it easier for us to identify our absolute location. Some apps such as GPS Tag can be downloaded for free to geotag and track locations of EJK incidents and other places of human rights violations. Sophisticated GPS receivers, while potentially costly, offer even more accurate readings. Some receivers also have cameras for taking photos, which are then automatically geotagged. Just take note that using this technology inside buildings, under the trees, and during cloudy weather may significantly decrease its reliability.

Remote Sensing is a technology used to record aerial images of landscapes through electromagnetic waves such as visible light, microwaves, and radio waves. A common example of this is Google Earth where you can see a bird’s eye view of an area. Google Earth can be downloaded for free and can be used to digitize or create vectorized shapes of landscapes, buildings, and places of interest and to create maps.

Lastly, Geographic Information System (GIS) is a system of computer software, hardware, and people used to analyze spatial data and create maps. GIS software such as Quantum GIS (QGIS) is also available for free download, but technical skills are required to properly use it. Nonetheless, this technology is useful in extracting patterns through algorithms and other mathematical and statistical procedures.

Because of the diversity of spatial information that can be obtained, several mapping initiatives have already emerged. An example of this is the online project Ang Pangako: Bayanihan para sa Kapwang Nangangailangan  of The Foundation for Media Alternatives (FMA), an organization currently tapping the advantages of spatial information for human rights advocacies.

FMA, with the support from the Association for Progressive Communications, recently launched Ang Pangako, which can be accessed at angpangako.net. Through this initiative, FMA aims “to map and show the services being done in response to the bloody campaign against drugs”  including “services such as drug rehabilitation, financial support, and awareness and education.”

The website contains three sets of data maps, namely Services and Efforts, Rehabilitation Centers, and Victims that use Google Maps as the geospatial platform.

Services and Efforts can show up to ten layers of providers of legal, psychosocial, medical, forensic, and sanctuarial services and networking, organizing, educational, and documentation efforts from civil society organizations, religious organizations, national and local government institutions, law groups, and media which can be overlaid against each other. Just by ticking the checkbox, a comprehensive list of organizations, groups, and institutions can be seen as well as their location in the country. One can see details such as names of organizations, descriptions, actions, contact details, and website links by clicking on a name in the dropdown list or location pointer on the map. 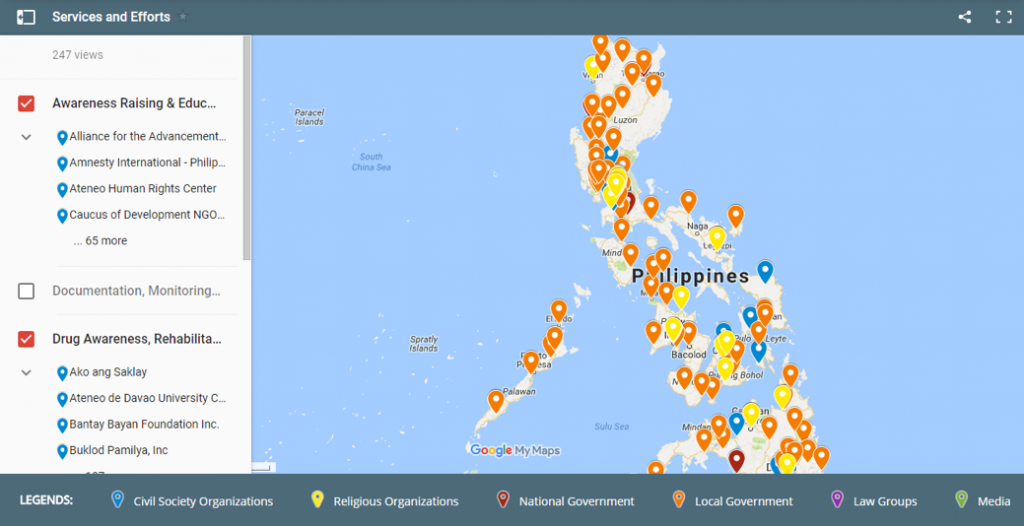 Services and Efforts Map of AngPangako.net

Rehabilitation Centers can show up to two layers of DOH and non-DOH accredited drug rehabilitation centers in the Philippines. It is particularly helpful in locating the nearest facilities that can help drug dependents. One can see the details such as names, descriptions, contact details, website links and addresses of the rehabilitation centers by clicking on a name in the dropdown list or location pointer on the map.

Lastly, Victims can show up to three layers of location information of EJK victims classified according to sex. According to FMA, the list has been verified through a method called triangulation whereby the details of a specific victim and the incident were crosschecked with news reports from different online media outlets. The victims’ details such as names, personal information, incident details, drug connection, and media sources of the information can be accessed by clicking on a name in the dropdown list or location pointer on the map. 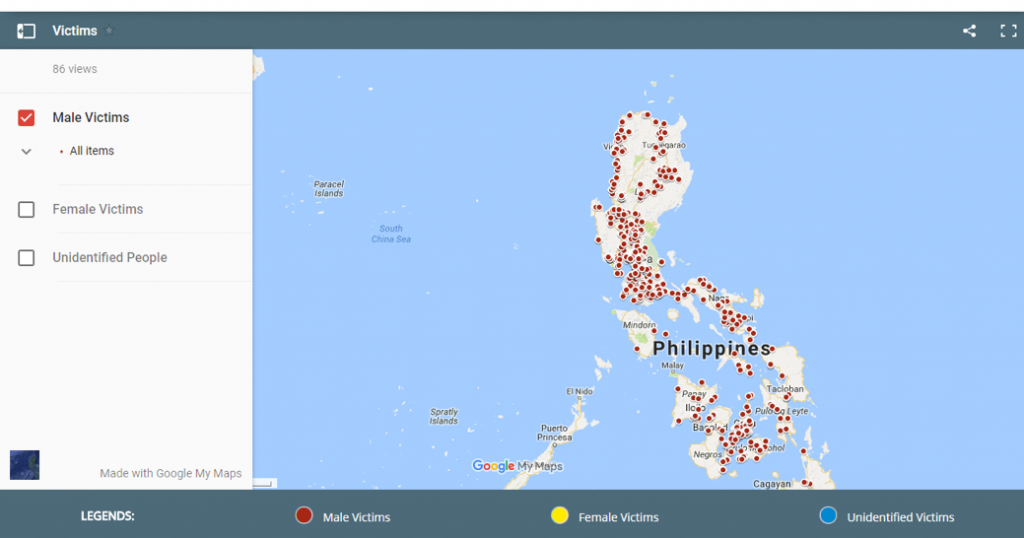 Supporting this spatial information are further resources such as downloadable copies of national legislation and relevant files (e.g. memorandum circulars, investigative directives) from the Department of Interior and Local Government (DILG), the Office of the President (OP), and the Philippine National Police (PNP) in its Resources section.

A key feature of the site is its openness to user-submitted data. Members of the public can submit their own information by going here. FMA will store your submitted data and check its veracity before posting them on the map.

Spatial information, utilized correctly, will strengthen the evidence base that would then drive the actions and efforts of the human rights community from information and education work to monitoring and documentation of human rights violations, and to provision of services and interventions. The impacts may range from ensuring a better informed citizenry to increasing the number of rights claiming initiatives that can exact accountability and obtain justice for victims of human rights violations.

All of this starts with one question: Where?