IN A COERCIVE ENVIRONMENT: Nursing a Culture of Fear and Breeding Tolerance to Impunity 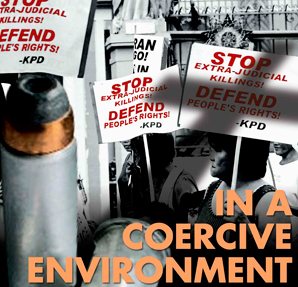 DESPITE OFFICIAL pronouncements that the human rights (HR) problem of the country was being “looked into,” the HR record of the Arroyo administration hardly improved during the second half of 2007.

There was a seemingly serious attempt to solve and bring to a stop the appalling series of extrajudicial executions and cases of forced disappearances that have claimed the lives of journalists, lawyers, church workers, labor leaders, and other activists. But the cases remained unsolved, and new killings continued to occur. 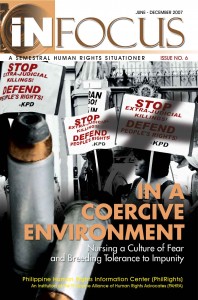 In his article “IN A COERCIVE ENVIRONMENT: NURSING A CULTURE OF FEAR AND BREEDING TOLERANCE TO IMPUNITY”, Renato Mabunga notes that while cases of extrajudicial killings seemed to decrease in the second half of 2007, this should not be interpreted as an improvement in the HR situation. Rather, he warns, the waning number of cases should be seen as a mere lull, calculated to make the international HR observers and local HR advocates slacken their watchfulness. In fact, as the article points out, this seeming decrease in occurrences is but a portent of more violations. Instead of easing up, HR advocates should be more vigilant than ever.

If there was a disquieting lull in the civil-political arena, there was noise, as ever, in the ESC rights sectors.

The education department was rocked by another scandal, involving the P26.4 billion Cyber Education Project (CEP). Just like other projects initiated with loans from the Chinese government, allegations of bribery and other irregularities surrounded the project. Rhoda Viajar discusses the overpriced CEP in her article, “A SEMESTER OF SCANDALS IN EDUCATION”.

The staggering amounts involved in the CEP, the NorthRail and SouthRail projects, the National Broadband Network, and other recent deals with China, and the impunity with which graft and corruption are practiced in the country, would be enough to drive one’s blood pressure to dangerous levels. But Filipinos cannot afford to be sick. As Candy Diez points out in “FAILING HEALTHCARE”, the government’s health program has failed to address problems of accessibility and affordability of medicines and medical care.

Roel Andag (“HUNGER AS HIGHLIGHT”) shoots down the triumphalism attending President Arroyo’s gloating over the supposed impressive performance of the economy, as shown in the growth figures of the gross domestic product. Beyond the rhetoric couched in macro-economic shibboleth are the faces of hunger that belie, in stark terms, any shrill trumpeting of economic growth.

If the country’s economy remained afloat, it was not because of good stewardship or effective governance, but because millions of overseas contract workers (OFWs) send in their earnings from abroad. For decades now, the local employment sector has lost its capacity to absorb the fast-growing labor force. Rather than die of starvation in their own country, Filipinos have been forced to endure unspeakable hardship in foreign lands.

It is not to say that those who have opted to work locally do not face horrendous working conditions. As Felipe Hernandez describes in “THE LABOR SITUATION IN THE PHILIPPINES”, local workers are victims of various anti-labor practices: paid with starvation-level wages, denied their rights to unionize, denied security of tenure. Workers’ rights are bulldozed because of the government’s blind drive to attract investors to its economic zones.

What is aggravating is that, as the poor and marginalized suffer under these irresponsible government priorities, a select few rake in millions – billions, even – from anomalous deals. The SouthRail/ NorthRail projects, for example, have resulted in the demolition of tens of thousands of houses in Metro Manila, Bulacan, Laguna and Pampanga, while huge kickbacks went allegedly to certain pockets.

The obscene practice of profitting from the misery of multitudes continues with impunity. Thus, while there is a reported housing boom in the country, millions have to live in sub-human conditions and even live in the streets. “HOMELESS DESPITE THE HOUSING BOOM” looks at this seemingly paradoxical situation, explaining that the increasing demand for mid-priced and high-end real estate is driving more and more people to the slums or to the mercy of the open streets.

In mid-2007, the country elected a new set of senators, congressmen and local government officials (provincial and municipal level). Towards the end of the year, new barangay officials were also elected. There was hope that, with a new mandate, these leaders would bring in changes. It was hoped, for example, that the Cheaper Medicines Bill, which the previous Congress failed to pass into law, would now be fast-tracked. By year’s end, the bill was still in limbo.

Also in limbo are the solution to the other human rights issues that should have long been addressed: low-cost housing, quality education, better and more accessible healthcare, quality jobs, and an end to the impunity of extra-judicial killings and enforced disappearances. The government’s stubborn resistance to fulfill its human rights obligations should remind people that silence and passivity, in a coercive environment, can only embolden those who have nothing but contempt for human rights, and encourage more violations.

THE FIRST SEMESTER of 2007 saw the playing out of a tired scenario: politicians traipsing up and down the breadth of the country courting the voting populace.

The circus had returned: was election season once again.

There was hardly anything to distinguish the latest electoral exercise from past elections. All the old and worn tricks were pulled out of the campaign hat: promises were intoned, money was liberally shelled out, goons were unleashed, blood was spilled, and spilled generously.

If there was anything remarkable about the recent polls, it was the ferocity by which the party-list seats were contested. 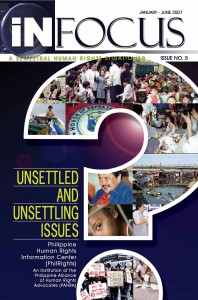 The first article for this semester’s IN FOCUS (“The 2007 polls: A vote against unsettled and unsettling issues” by Loretta Ann P. Rosales) assesses the recent national elections in light of human rights issues that should have been at the core of the campaign discourse. As the writer asserts, the results of the May 2007 polls (especially that of the senatorial race) loudly express the people’s revulsion towards the current administration. Yet in a number of instances, the people’s will was also thwarted: some of the election victories were fraudtainted. The author rues the dwindling number of progressive partylist representatives in the Lower House, but she also warns about “days of disquiet and nights of rage.”

A national election offers opportunities by which the citizenry can stake their claims on human rights. At the very least, it offers a venue in which pressing issues can be discussed. Sadly, however, Philippine-style elections have not evolved to that level. Health concerns, for example, were hardly mentioned by the candidates. Not one of those who ran for elective positions placed health rights as a top priority. Because health issues never got to the forefront, reelectionist lawmakers avoided being put to task for their failure to pass the Cheaper Medicines Bill during the 13th Congress. These and other plagues of the health sector are discussed in “Health headaches seek state cure”.

If health issues did not make it to the candidates’ agenda, neither did the issue of food. How would hunger and malnutrition figure as an election issue when the president herself would not admit to the stark truth that Filipinos are food-poor? In answer to the question: “Just how hungry are the Filipinos?”, the writer looks at the latest hunger statistics that put to a lie, in no uncertain terms, the economic growth trumpeted by the president. Causes are looked at and current food programs are assessed. The prognosis: hunger mitigation programs that do not recognize the root causes of the problem will go nowhere.

Prof. Flora C. Arellano contributed the article on education, “The social dilemmas in Philippine education: Roadmap and challenges”. She looked at the disturbing trends in the education sector, among which is the poor quality of graduates. One should not be surprised why Philippine education is in such a sorry state: government allocation is never sufficient, because paying off its foreign debt eats up the bulk of the annual budget. The author catalogs some possible solutions to the education woes, all of which entail firm resolve on the part of the State. After all, it is the State’s obligation to ensure that quality education is provided to its growing citizenry.

The right to housing, another issue snubbed but exploited during the May elections, is dissected in “Still searching for a roof: The right to housing situation”. The government was implementing the most massive eviction in the country’s history, yet candidates remained resolutely silent on the issue. It would have been a ripe opportunity for the people to push shelter and human settlements at the top of the election agenda.

If the election enterprise loomed large on the socio-political landscape during the first semester of 2007, it did so against the backdrop of massive human rights violations. Political killings increased, forced evictions continued, hunger stalked the majority, and health services and quality education remained privileges rather than rights. It remains to be seen whether the latest poll exercise, one that cost billions of pesos and hundreds of lives, will help in the fulfillment of the people’s basic human rights. —JM Villero