Desperate Measures: HUMAN DIGNITY AND THE CULTURE OF IMPUNITY 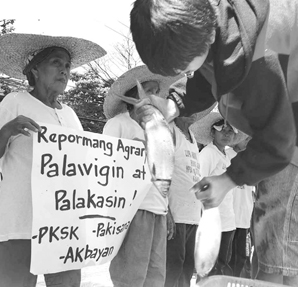 THESE ARE desperate times.

Despite the deluge of ‘ramdam na ramdam’ propaganda, no one, in all honesty, could tell of having felt, let alone benefited from, the ‘asenso’ that the Arroyo administration is bleating about.

Primetime television notwithstanding, there is nothing remotely entertaining, or watchable, about the exposed desperation of an impoverished and starving population.

A mother of four recently committed suicide after she poisoned her three young daughters, ages 2, 3 and 4. Extreme poverty drove her to do this, the neighbors said. The wages of her construction worker husband could not meet the family’s daily needs, they said. Though she never complained about it, the neighbors could feel her desperation. “Hindi man siya magsalita, ramdam namin,” one neighbor told the media.

In early July this year, a 20-year-old man, hungry and depressed, climbed a 50-meter Transco tower. He wanted to kill himself. He had arrived from the province, having been promised a construction job in the metropolis. But when he arrived in Manila, the recruiter left him at the wharf. For four days, he wandered around the city with an empty stomach.

Another jobless man was driven by hunger to hold hostage his common-law wife and their one-year-old daughter. According to the wife, they had been subsisting on rice gruel which kindly neighbors would give them. She told investigators “she cannot even remember the last time they had a full meal.”

In Quezon City, a 47-year-old man was mauled to death by a fellow scavenger. The mauler reportedly “got irked when the victim tried to get his leftover rice.”

These terrible incidents are indictments of an administration that has never been called to account for its failure to fulfill the most basic rights of its citizens.

It used to be that hunger, joblessness and poverty drove thousands upon thousands of Filipinos to flee the country. Even that recourse is not available to some, these days. 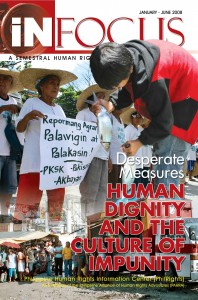