IN FOCUS Special Edition (Issue No. 8)

A Deficit on Human Rights: Philippine NGO Network Report on the Implementation of the International Covenant on Economic, Social and Cultural Rights (ICESCR), 1995-2008 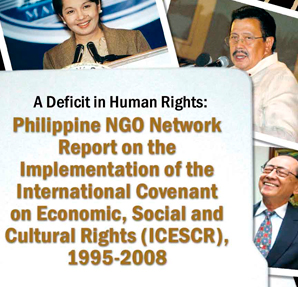 IN RESPONSE to the Philippine government’s second, third and fourth periodic reports on the implementation of the United Nations International Covenant on Economic, Social and Cultural Rights (UN-ICESCR), civil society groups came together and prepared their own account of the human rights situation in the country.

The government’s consolidated report (‘regrettably’ delayed by 11 years, as noted by the Committee on ESCR), as well as the civil society alternative report, covered the period 1995-2008.

This special issue of In Focus contains the alternative report (in an edited version) presented by civil society groups before the UN periodic review in Geneva, Switzerland on November 10, 2008.

The completion of this report was made possible through the efforts of some 148 non-government organizations, people’s organizations, federations and alliances, as well as countless individual human rights advocates who contributed data and other materials, took part in the consultations, helped in the analysis and ensured that this was delivered in time for the Committee review.

Their efforts yielded the alternative perspective on the human rights performance of the Philippine government which was presented before the 41st Session of the UN Committee on ESC Rights.

The Centre on Housing Rights and Evictions (COHRE) and Terres des Hommes-France (TdHF) provided support for the completion of this alternative report. Moreover, COHRE provided comments on the draft of the report.

Included in this special edition of In Focus is the full text of the advance unedited version of the Concluding Observations of the Committee on ESC Rights.
Since the alternative report focused on the status of ESC rights in the country, we are including in this special issue a situationer on civil and political rights, prepared by the Task Force Detainees of the Philippines (TFDP). With TFDP’s “Tales of Terror: A Civil and Political Rights Situationer,” this special issue hopes to provide a comprehensive picture of the human rights situation in the country.