THE CARAVAN OF HORROR GOES ON 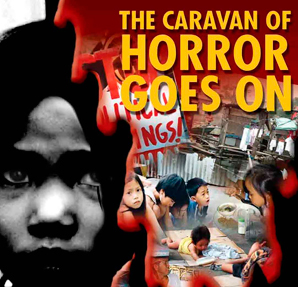 IN THE second half of 2006, the human rights situation in the country continued to plummet.

Even in the face of growing condemnation from both local human rights groups and international institutions, including the European Union, the Arroyo administration kept turning an unseeing eye to the spate of extra-judicial killings and the growing desperation of the masses that confronted the specter of hunger. In Metro Manila, more urban poor families were forcibly evicted, as the government blindly pushed on with a mega-billion peso railway rehabilitation project.

It is this heedlessness that has increasingly characterized President Arroyo’s leadership, a heedlessness that is primarily marked by arrogance. This heedlessness has been repeatedly demonstrated: by its refusal to do something concrete to end the culture of violence and impunity; by its refusal to provide meaningful changes in the education situation; by its inability to stem the alarming exodus of health professionals; by its continued callousness towards the plight of Filipino laborers, whether locally employed or working overseas; by its forcible eviction of an unprecedented number of families living along the railroad tracks. 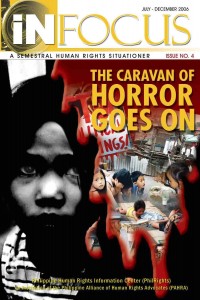 All these are detailed in this issue of In Focus, the fourth since PhilRights started coming out with a semestral human rights situationer.

In “Murder, She Wrought”, the Arroyo administration’s grisly record of politically-motivated killings is examined within the context of the government’s anti-insurgency strategy. No matter how loud or constant the official denial, the certainty remains: the victims of extra-judicial killings are those who are identified with sectors that are critical of the government.

A life of dignity seems to be unattainable to the majority of the Filipino people. The right to food, a crucial component of the right to life, has been largely denied to the people. Why hunger stalks the poor when the country is supposedly experiencing an economic growth (as is shrilly boasted up and down the archipelago) is discussed in “Hunger in the Midst of Economic Growth”.

If hunger afflicts the nation, then it is hardly surprising if the people’s right to health is also compromised, as detailed in “Health(s)care Philippines”. After listing down the plagues of the country’s health sector, the author caps the article on a positive note: it may not be as scary as that, after all, if only the government seriously gets down to the business of providing adequate and affordable healthcare to its populace.

Another basic right that has been denied the poor majority is education. No one will dispute the fact that obtaining basic education in the Philippines is becoming more expensive. Those who cannot afford the expenses have to make do with education that is way below  standards, or drop out of schooling altogether. “Stating the Obvious: The State of the Philippine Education Sector” describes the woes of learning and teaching in the country.

“Without a Roof Over their Heads” looks back at the housing problem in the second semester of 2006. The years 2005 and 2006 have been very harsh to the tens of thousands of urban poor communities in and around Metro Manila, especially those who have made their homes along the railway tracks (riles). These families, already in the extreme peripheries of the country’s economic, social and political life, have made huge sacrifices in the name of development. This time, their sacrifice was made to pave the way for the completion of the Northrail-Southrail Linkage Project, a multi-billion peso priority project of the Arroyo administration.

Development should always benefit the majority of the population. More specifically, development should be designed to benefit those who have less in life. Development should not come at the expense of painful sacrifices, especially by the marginalized sectors. If socalled development projects further derogate the rights of the people and further strip them of their dignity, then no amount of rationalization can make it morally justifiable.

WE THOUGHT that the Marcos reign of terror and plunder is well behind us. And that we had safely moved past the gluttonous excesses of the Erap presidency. After two socalled “peaceful revolutions”, numerous putsches that went pfft, several economic “take-offs” and more economic crashes, where exactly are we?

We are still in the heydays of summary killings (or extrajudicial executions, popularly referred to as “salvagings”) and involuntary disappearances.

Almost everyday, the news reports another case of murder or the disappearance of a farmer, a labor organizer, a leader of a progressive party-list group, a church worker, a lawyer or a journalist. In previous decades, vigilante and paramilitary groups were notably notorious for sowing terror; this time, the perpetrators are almost always motorcycleriding men wearing helmets or bonnets. If no particular killer can be pinpointed and brought to justice (perhaps because no witnesses are willing to come forward, or because the perpetrators could not be identified beneath their masks), the pattern of execution is too similar to be considered coincidental.

[now retired] Maj. Gen. Jovito Palparan happens to be assigned. The bespectacled general, who makes no bones about his rabid anti-communist obsession, has been aptly named The Butcher of (a) Mindoro and (b) Samar.

Most recently detailed in Central Luzon, Palparan is the very poster boy of President Arroyo’s human rights record. In her latest state of the nation address, the president singled him out for kudos; then in the same breath, Arroyo intoned that she does not condone political violence. This president cannot make up her mind.

These are indeed highly dangerous times, when we are governed by madness and absurdity. If we don’t stand up for our rights, we will be swallowed by the lunacy around us. 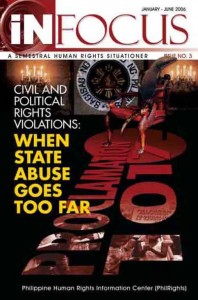 The first article in the third issue of IN FOCUS, “Civil and Political Rights violations: When State abuse goes too far” by PhilRights executive director Dr. Nymia Pimentel Simbulan, chronicles the ever-heightening assault on our people’s fundamental right: the right to life. The list of victims of “salvagings” and forcible disappearances serves as an indictment on the Arroyo administration’s indifference to its human rights obligations. It also serves to remind us that this culture of impunity flourishes when we slacken down on our vigilance.

Sonny Melencio’s “We’re not hiring: The impairment of the Right to Work in the Philippines”, looks into the depressing labor situation: millions of jobless Pinoys (about a third of the 36-million workforce); those who have jobs are still seeking additional work and income; regressive laws and policies that throttle labor organizing and unionism; and a repressive political climate that preys on labor organizers and leaders. A curious fact is pointed out: those with higher educational attainment reported a higher unemployment rate. With nothing but a dead-end future yawning ahead, it is not surprising that Filipinos are leaving the country in droves.

“The Right to Health in the Philippines: Well under the weather” is a medical doctor’s prognosis of the health situation in the country. Dr. Aurora Parong ticks off some of the plagues of the country’s health sector: a measly health budget that looks like loose change compared to the military budget; medicines that are way beyond the means of ordinary Filipinos; neglect of women’s health needs and those of overseas workers’; failure to combat preventable diseases; a poorly nourished growing population; and a collapsing health industry due to the out-migration of health professionals.

The Urban Poor Associates contributed “Homeless along the riles: Urban poor families squashed under the tracks of development”, which monitors the ongoing demolitions around Metro Manila. As the UPA reports, the first semester of 2006 was especially distressing to those who are affected by the SouthRail project – an ambitious railway project that costs billions of dollars, and those families who were evicted to give way to some hare-brained “beautification” projects.

In “Government scandals amidst the food crisis: Wasting millions while millions of Pinoys waste away in hunger”, Maria Mendoza pinpoints some of the factors that compromise the food security of the country. Among these are the low priority given by the government to agriculture; the slow-paced agrarian reform program, that seems to take forever to accomplish; and misuse of government funds supposedly allocated to the agrarian sector.

State abuse and neglect of people’s rights and welfare can only go too far. At some point, preferably sooner than later, the Filipino people have to put an end to such impunity. Only then can the people reclaim their collective dignity that has been steadily corroded under an illegitimate regime.