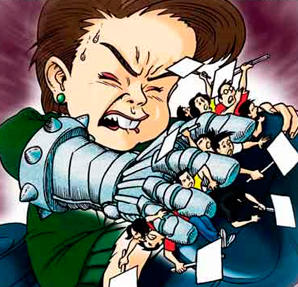 TURMOIL marked the second half of 2005, with the intensificationof mass protests, resulting from both the worsening economic crisis and the political fall-out in the aftermath of the jueteng scandals and the ‘Hello Garci’ exposé. Fed up with the stratospheric cost of living, and enraged at a president whose legitimacy became less certain the more she clung to her privileges, increasing numbers of people took to the streets demanding for change. Or at least some respite from the unbearable burden of subsisting under harsh economic conditions – and under a dubiously-elected president at that.

Arroyo’s backlash was only expected: step up repression, intimidation, harassment. A long-forgotten Marcosian edict was resuscitated – the “no permit, no rally” policy, which, inexplicably, no one had bothered to repeal, abolish, nullify or even amend since 1986. Along with the deployment of fully-armed anti-riot squads was the deployment of officialese: the “calibrated preemptive response” (or CPR) became a
household word. In utter defiance of the Constitution, she issued E.O. 464, barring any member of her cabinet and military officials from testifying in legislative hearings sans her say-so.

By way of diverting her opponents’ energies, the president suddenly vigorously pushed for charter amendments. Controversial even before take off (because of another exposé involving the Venable contract), Arroyo’s cha-cha steps nevertheless bull-dozed its way onwards. In the meantime, crude tactics bashed a much-publicized impeachment attempt in Congress.

Such arrant abuse of power can only further enrage a nation desperate for relief from the miseries brought about by political bickerings, the high cost of living, lack of opportunities for decent livelihood, and lack of access to basic social services. 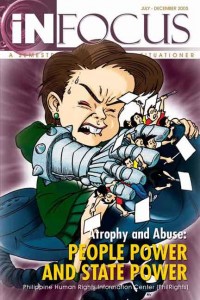 This issue of In Focus looks at how a scandal-ridden administration, desperately hanging on by a thread, wields its state/police power to crush legitimate expressions of people power. Our writers examine the ever-narrowing political space by which people can exercise and enjoy their human rights and civil liberties, as state repression slowly chokes the basic rights and freedoms of Filipinos.

The first article, ‘Violence, political repression and impunity: Survival tools of a struggling regime’ details how human rights and civil liberties have been arrogantly trampled on by an administration desperate to hang on to power in the face of popular opposition.

As the squabbling of politicians dominated most of the national attention in the second half of 2005, other more important problems were being forgotten. ‘The labor sector: Tall tales, sad stories’ examines the woes of the labor sector – the supposed “rosy employment situation” that was made possible through statistical inventiveness. And whoever said that numbers cannot lie?

A collapsing health industry is dissected with scalpel-sharpness in ‘Doctors as nurses: How to brew a health crisis’. The article looks with an unflinching eye on the ongoing hemorrhage of the country’s health industry – medical doctors abandoning their country, their patients, their practice, their hospitals and clinics, and even their MD titles, and fleeing the country to work as nurses in medical facilities abroad. For the country’s ailing health sector, a shot in the arm is apparently not enough.

Ill-conceived ‘development’ plans have always doomed the marginalized and disempowered, whose interests and welfare are always hunted aside and squashed underfoot in the blind race called development. ‘The herculean task of relocating 40,000 NorthRail families’ examines the unheroic feat of shooing away thousands of families living along the railroad tracks. The article raises the pressing question: development for whom? It likewise leaves us with the unsettling realization: that it is indeed an ill wind that blows under the force of development aggression.

In the face of all criticism and condemnation, President Arroyo’s favorite coda has always been that she has done well for the country’s economy. But it is an argument that flies in the face of gut-level evidence: Filipinos are a hungry people. ‘What’s on Your Plate? The Food Situation in the Philippines’ looks into the reasons why more and more Filipinos have so much to grumble about. Food is a basic right, and without it, the enjoyment and exercise of all other rights is severely hampered.

But take heed: a hungry person is an angry person.

Globalization and the war against terror have created conditions and provided justifications for the Philippine government to adopt policies and programs resulting in violations and abandonment of its human rights obligations. In the name of global competitiveness, it has pursued the liberalization of agricultural products, privatization of public utilities and social services like water and health, the freezing of workers’ wages, reduction of national allocation for basic social services, and the imposition of new taxes like the expanded value added tax (EVAT).

Meanwhile, under the auspices of national security and public safety, the Philippine government has been pushing for the passage of an anti-terrorism law, institutionalized a “multi-purpose” identification (ID) system, and conducted illegal and arbitrary arrest, search and seizure activities in so-called “terrorists strongholds”. Moreover, it has intensified the use of militarist strategies in handling the conflict in Muslim Mindanao, and perpetuated the discriminatory and cruel treatment of suspected terrorists, mostly Muslims.

All these state actions have resulted in the curtailment of the people’s civil and political rights and freedoms, and the violations of their economic, social and cultural rights. In the midst of the country’s economic and political crises which have worsened with the exposé of the “Gloriagate tapes”, institutionalized graft and corruption, unabated increases in the prices of petroleum products and the ballooning of the country’s external debt, human rights violations are expected to further escalate and the threats and challenges to human rights are expected to increase. 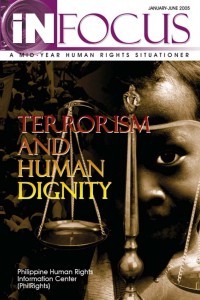 It is in this social backdrop that the Philippine Human Rights Information Center (PhilRights) is introducing the maiden issue of In Focus: A Mid-year Human Rights Situationer (January-June 2005), a bi-annual publication of the institution dealing with contemporary human rights issues and concerns affecting Philippine society. The heightening threats and challenges to human rights particularly in the era of globalization and the global war against terror have emphasized the increasing need to make the general public aware and well-informed about the factors and conditions which make their lives unstable and vulnerable to human rights violations. Armed with accurate data and information, peoples, communities, and their organizations will be able to more effectively claim and defend their rights as human beings.

In Focus: A Mid-year Human Rights Situationer, a regular publication of PhilRights, discusses the situation of the people’s civil and political rights, and economic, social and cultural rights, specifically the rights to food, health, education, housing and work, during the past six months. It provides timely and accurate data and information, case studies and important events illustrating the state of and problems affecting human rights. Through the publication, PhilRights expects to assist and contribute to the education and advocacy activities of NGOs and other civil society groups so that they can more effectively defend and claim their rights. Concomitantly, the publication is also expected to be used as a source of information by government officials, workers and legislators so that they can assess the state of their compliance with their human rights obligations.

Realizing the importance of disseminating timely and accurate human rights data and analyses and of assisting in the political conscientization process of the general public, PhilRights is coming out with In Focus: A Mid-year Human Rights Situationer, another material expected to achieve these objectives. Like other publications of the institution, the report is a collective effort of the PhilRights’ research and information staff. Data and information used in the report were derived from the member organizations of the Philippine Alliance of Human Rights Advocates (PAHRA), newspaper articles, government agencies/organizations, and international reports/studies.

We hope our target audience will find the various articles contained in this mid-year report useful in the conduct of their respective lines of work. Cognizant of the important role of knowledge in the struggle for human rights, we share with you the initial release of In Focus: A Mid-year Report.

The year 2005 opened with violence and conflict, particularly in Muslim Mindanao, with the series of bombings which took place in the island of Sulu. This was followed by the Camp Bagong Diwa massacre of 26 detainees suspected to be members of the Abu Sayyaf Group and suspected to be involved in the foiled escape attempt. The escalation of summary executions targeting journalists, suspected criminals
and members of militant organizations in various parts of the country has likewise been observed and has contributed to the volatile human rights situation in the country.

In mid-June, the “Hello Garci” tapes came out and all hell broke loose. The alleged wiretapped conversations between election commissioner Virgilio Garcillano and PGMA hinting that the latter cheated in the 2004 elections sparked mass protests and political realignments that almost kicked her out of Malacañang.

In the economic and social spheres, the unabated increases in the prices of gasoline and other petroleum products have triggered a corresponding rise in the costs of basic goods and services, making it more difficult for the poor and unemployed to survive. Deprivations in food, health, education and housing have continued to be glaring realities in the lives of people, both in the urban and rural areas. As in previous years, basic social services have not been given the necessary attention and funding by the national government since debt servicing and national defense have remained the top priorities in the 2005 national budget. Thus, further deterioration in the quality of education has been noticed with the persistence of oversized classes, leaking and dilapidated classrooms and school buildings, lack of teachers, chairs and textbooks. Meanwhile, the health care delivery system has been beset by the mass exodus of health professionals in search of better pay and professional growth. Nurses and doctors trained as nurses have gradually left the country for abroad, leaving government health facilities particularly in the provinces with inadequate number of health personnel to attend to the growing health needs and problems of the rural population.

While discrimination, marginalization, and disrespect for human lives have dominated the civil and political landscape of the country, various forms of economic and social deprivations have undermined the people’s economic, social and cultural rights. The various forms of human rights violations have illustrated not only the failure of the state to respect and value human life but has also shown the state’s utter disregard in upholding the fundamental freedoms of the Filipino people. The inutility of the state in protecting, respecting and fulfilling its human rights obligations has created a chaotic environment characterized by the existence of a culture of impunity and arbitrary promotion of the rule of law.

Amidst all these deprivations and human rights transgressions, the only thing the government has succeeded in doing is to keep PGMA in power; after all it seems to be its primary consideration.

Under such a situation, the people, especially the poor and the marginalized, have no recourse but to stand up and defend their rights using all methods and resources available to them.

In this maiden issue: